The formulae of four organic compounds are given below:

(i) Which one of these compounds A, B, C or D is a saturated hydrocarbon?

(ii) Identify the organic acid and give its structural formula.

(iv) Give a chemical equation when B and C react with each other in presence of concentrated H 2 SO 4 . Name the major product formed and mention one of its important use.

A saturated hydrocarbon is a compound containing only carbon and hydrogen atoms and in which no double or triple bonds are present between any 2 carbon atoms.

Checking all the options

Therefore, D is a hydrocarbon.

Organic acids are compounds which contain a carboxyl functional group(-COOH).

Of these 4 compounds, compound B ie., CH 3 COOH (acetic acid) is the organic acid as it contains the carboxyl functional group.

Its structure is as follows: 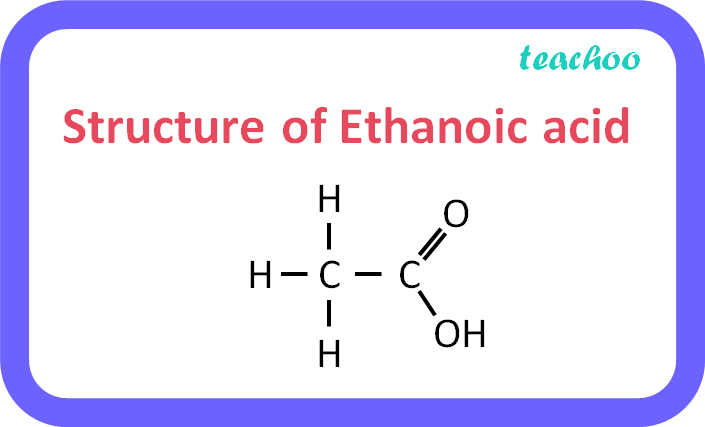 (iii) An alcohol with 2 carbon atoms , when heated at 443K in the presence of conc H 2 SO 4 gives ethene as the main product.

So, when concentrated H 2 SO 4 is added to it, a dehydration reaction takes place where one H 2 O molecule is removed and ethene is formed.

The chemical reaction that takes place is:

Reaction of Ethanol with concentrated H 2 SO 4

Concentrated H 2 SO 4 here plays the role of dehydrating agent   and removes water from alcohol.

(iv) Compound B is acetic acid and compound C is ethanol.

When an acid reacts with an alcohol , an esterification reaction takes place.

Reaction of acetic acid with ethanol: