A person cannot see distinctly objects kept beyond 2 m. This defect can be corrected by using a lens of power

Since the person can not see distinctly objects kept beyond 2m, the person is suffering from short sightedness of myopia.

This defect of eye can be corrected by using spectacles made of concave lens.

Hence, the power of the lens will be negative. (since focal length of a concave lens is negative)

The concave lens to be used should have a focal length of -2m.

At noon the sun appears white as

(a) light is least scattered

(b) all the colours of the white light are scattered away

(c) blue colour is scattered the most

(d) red colour is scattered the most

(a) light is least scattered

At noon, the sun is perpendicular to the earth.

Hence, the sunlight has to travel the shortest distance to reach the earth.

Since the distance traveled by the sunlight is less, very less light scatters and the sun appears white.

Which of the following statements is correct regarding the propagation of light of different colours of white light in air?

The speed of light does not depend on the colour of the light.

The danger signals installed at the top of tall buildings are red in colour. These can be easily seen from a distance because among all other colours, the red light

(a) is scattered the most by smoke or fog

(b) is scattered the least by smoke or fog

(c) is absorbed the most by smoke or fog

(b) is scattered the least by smoke or fog

The colour red has the longest wavelength, hence it is scattered the lease by smog or fog.

This is the reason why the danger signals installed at the top of tall buildings are red in colour so that they can be seen from far.

The bluish colour of water in deep sea is due to

(a) the presence of algae and other plants found in water

(b) reflection of sky in water

(d) absorption of light by the sea

The scattering of blue component of the white sunlight by the water molecules present in sea causes the blue colour of water.

How are we able to see nearby and also the distant objects clearly?

We are able to see nearby and also the distance objects clearly due to the power of accommodation of the human eye.

When we have to see distant objects, the eye muscles relax and become thin.

Due to this, the focal length of the eye lens increases and we are unable to see distant objects.

When we have to see nearby objects, the eye muscles contract and become thick.

Due to this, the focal length of the eye lens decreases and we are unable to see nearby objects.

Hence we are able to see nearby and distant objects clearly.

A person needs a lens of power –4.5 D for correction of her vision.

(a) What kind of defect in vision is she suffering from?

(b) What is the focal length of the corrective lens?

(c) What is the nature of the corrective lens?

(a) Since the lens used for correction has negative power, the person is suffering from myopia or short sightedness.

(c) We can see that the focal length of the corrective lens is negative.

Hence, the nature of lens is concave.

Is the position of a star as seen by us its true position? Justify your answer.

Hence, every lower layer is more optically dense than its preceding layer.

Due to this, starlight bends towards the normal as it passes through different layers of atmosphere.

Due to this, the apparent position of a star is a little above its actual position in the sky.

Why do we see a rainbow in the sky only after rainfall?

Rainbow is formed after a rain in a direction opposite to that of the sun.

After the rain, there are many tiny droplets of water still in the air.

When sun rays fall on these droplets,the rays get first refracted,the internally reflected and refracted again.

Due to this different colors of sunlight are bent at different angles and we are able to see a spectrum in the form of a rainbow.

What is the difference in colours of the Sun observed during sunrise/sunset and noon? Give explanation for each.

Sun is directly above us.

Light rays from Sun take lesser time to reach us.

Hence there is less scattering of blue light.

So Sun appears to be white.

During Morning and Evening

Sun is at the horizon.

Light rays from the sun take more time to reach us.

Hence, there is more scattering of blue color of sunlight which is of shorter wavelength.

Hence we are able to see the red colored sun because there is less scattering of red color.

Explain the phenomenon of dispersion of white light through a glass prism, using suitable ray diagram. 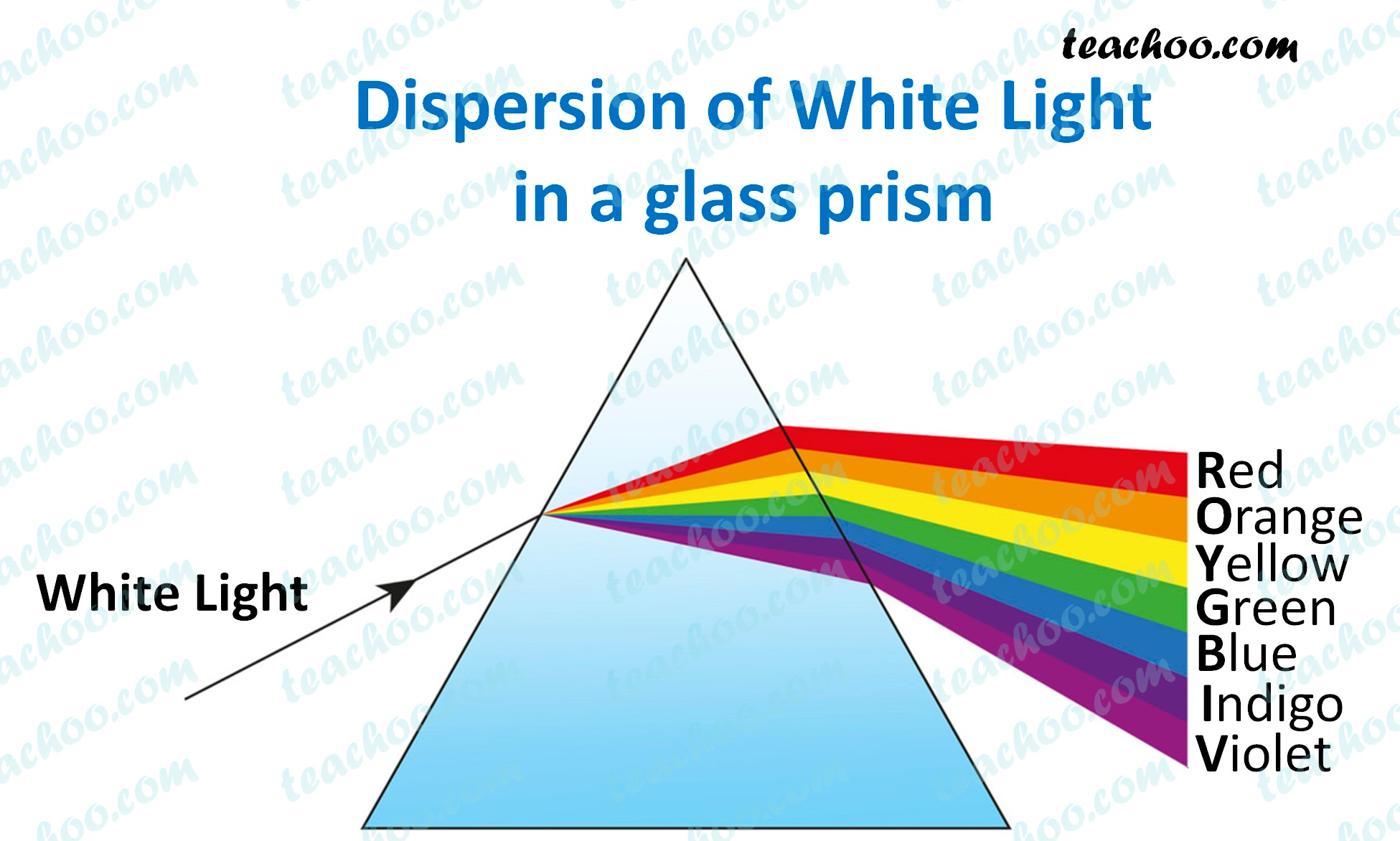 The splitting of white light into different colour components is called Dispersion.

When white light falls on a prism,it splits into a band of colors

Explain the structure and functioning of Human eye. 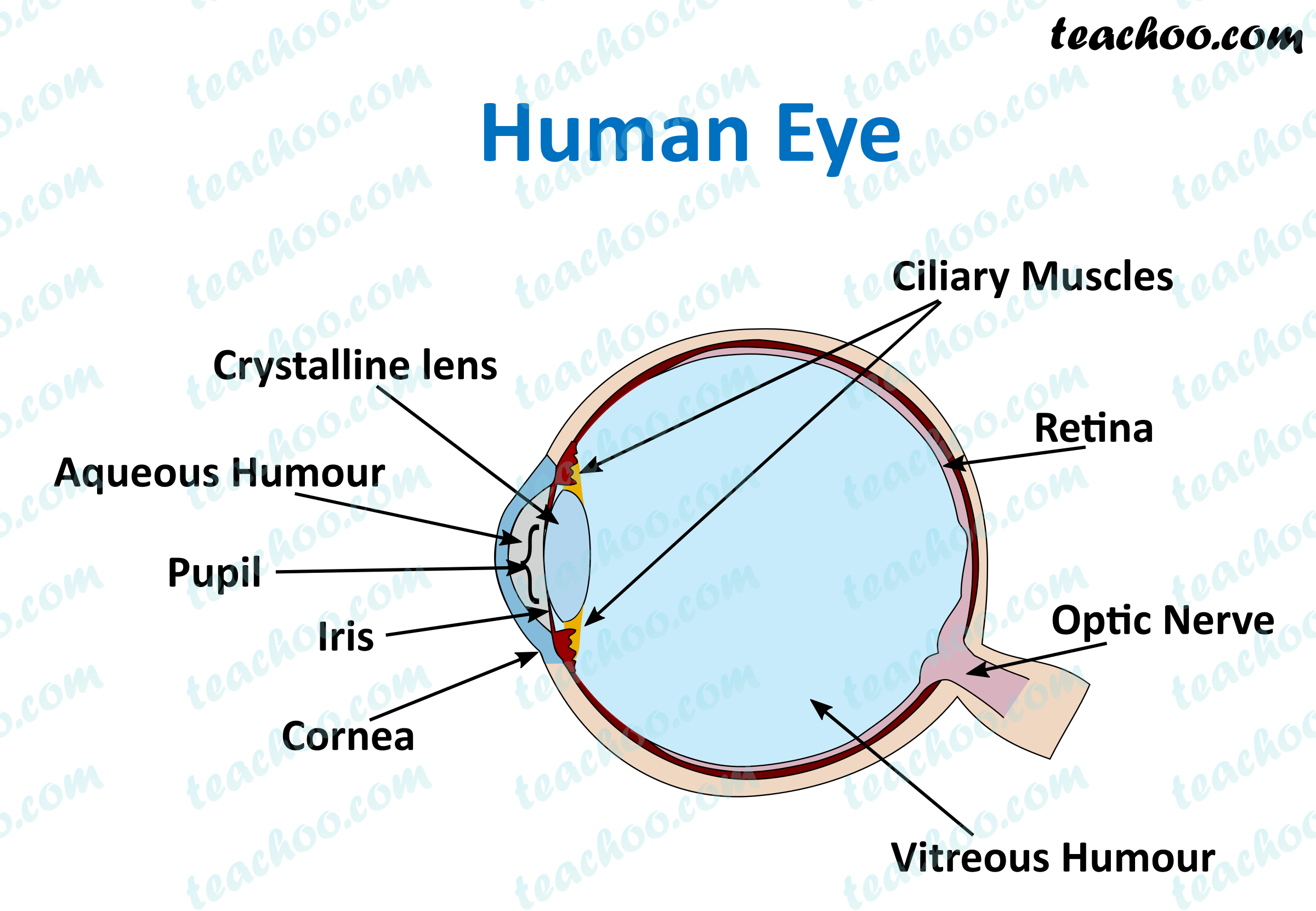 The outermost layer of the eye is called Cornea. It is transparent. Most of the refraction of light rays occur at cornea.

Behind the cornea, there is dark muscular structure. It is called iris. The colour of the iris of different people is different. Some have brown eyes, some black, some blue

In iris,there is a small opening called the pupil. Pupil Regulates amount of light entering Eyes

Behind the pupil, there is a convex lens which is called crystalline lens or eye lens. The Lens forms inverted real image on screen at the back of the eye called the retina.

It is a delicate membrane (layer) on the back of the eye. Image is formed on the retina. Retina contains different light sensitive cells.

They are sensitive to bright light. They sense color

They are sensitive to dim light

Sensations felt by nerves are transmitted to the brain by the optic nerve.

It helps in changing the shape of the lens. This helps lens to focus.