Natural and Manmade Resources What are Exhaustible and Inexhaustible Natural Resources? What are Fossil Fuels? Coal You are here Different Products of Coal Petroleum Different Constituents of Petroleum and its Uses What are Petrochemicals? Natural Gas Harmful effects of using Fossil Fuels Conservation of Fossil Fuels
NCERT Questions →
Class 8
Chapter 5 Class 8 - Coal And Petroleum

Coal is a hard black coloured substance which is mainly carbon 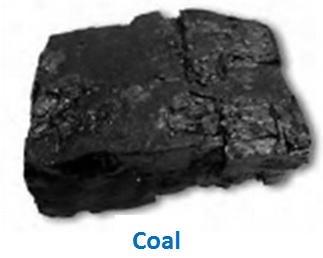 What are the uses of Coal?

Different uses of Coal are


How is coal formed?

Coal was formed by decomposition of dead plants and trees (dead vegetation) into carbon.

Millions of years ago, there were dense forests on earth in low lying areas

Due to floods, earthquakes, volcanoes, etc., the forest got buried in soil

As more and more soil deposited over them, they sank deeper
Due to high temperature and pressure inside the earth, and the due to no air inside the earth,
the dead plants and trees got slowly converted into coal.

NCERT Question 3 - Describe how coal is formed from dead vegetation. What is this process called?