In this case, Exchange Rate of a currency is fixed by the Government

Exchange Rate does not fluctuate daily

(Example- Suppose Govt fix exchange Rate at Rs 70 per $,it will remain the same unless govt changes it

This is done to ensure stability in foreign trade 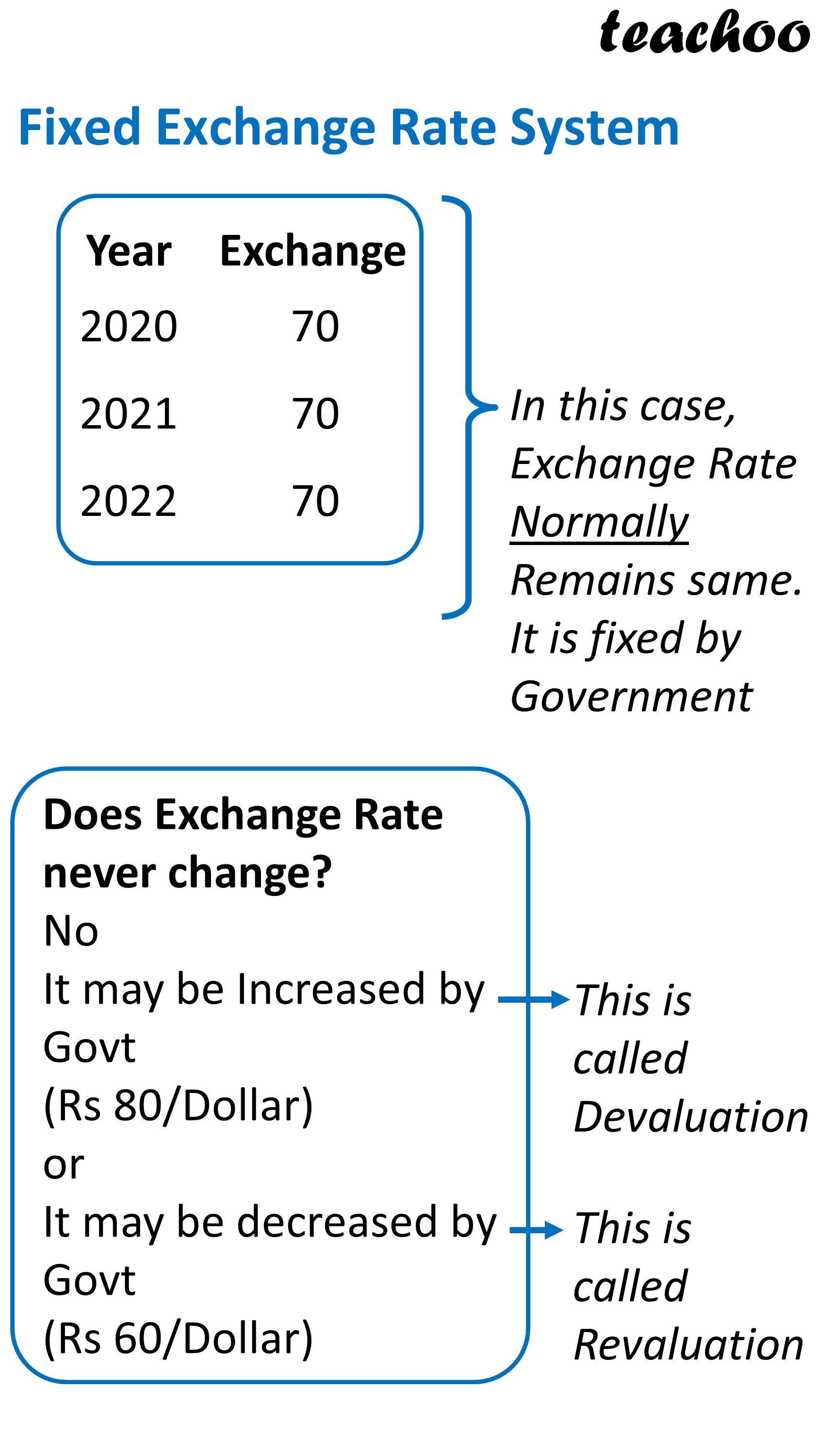 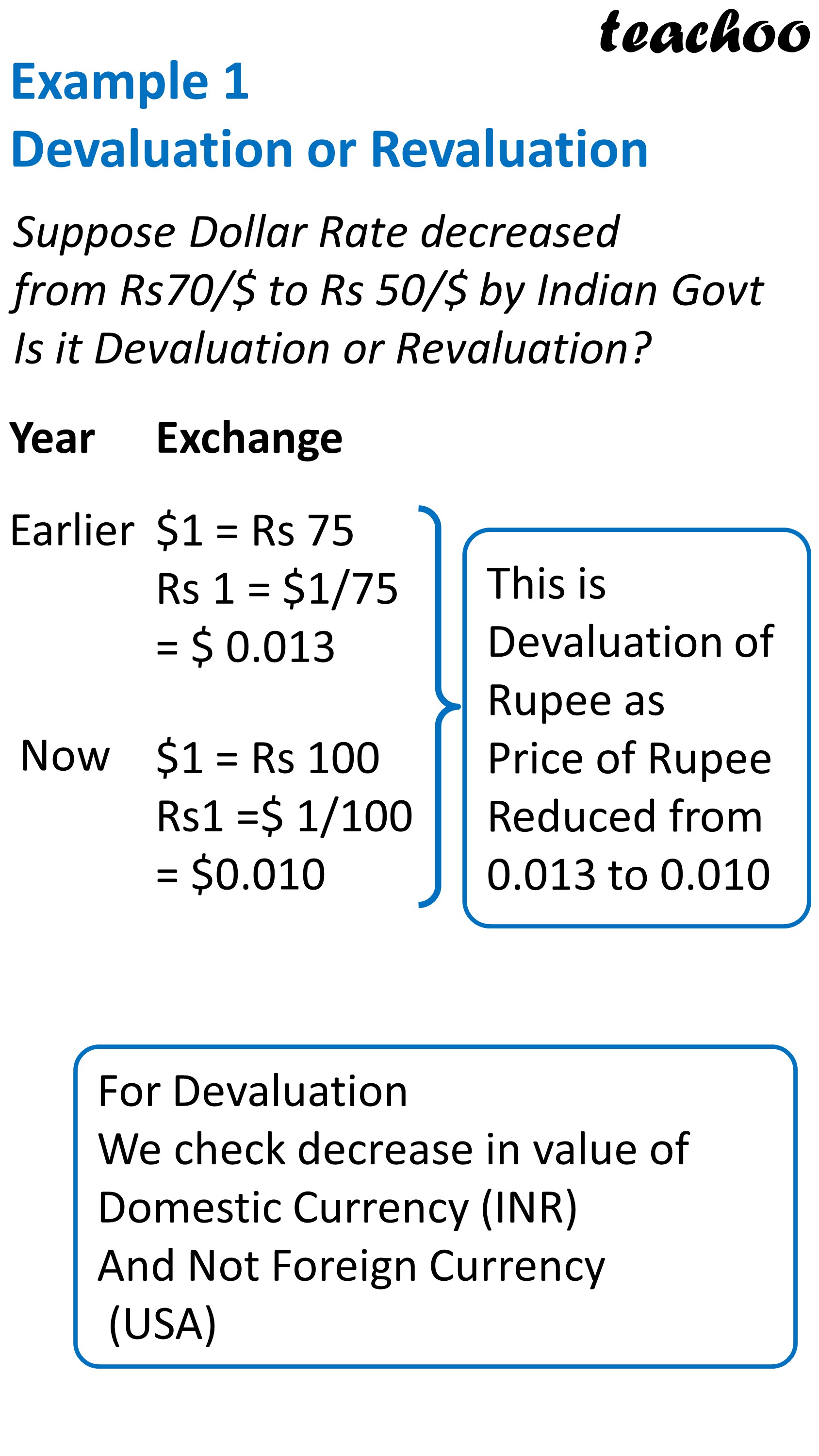 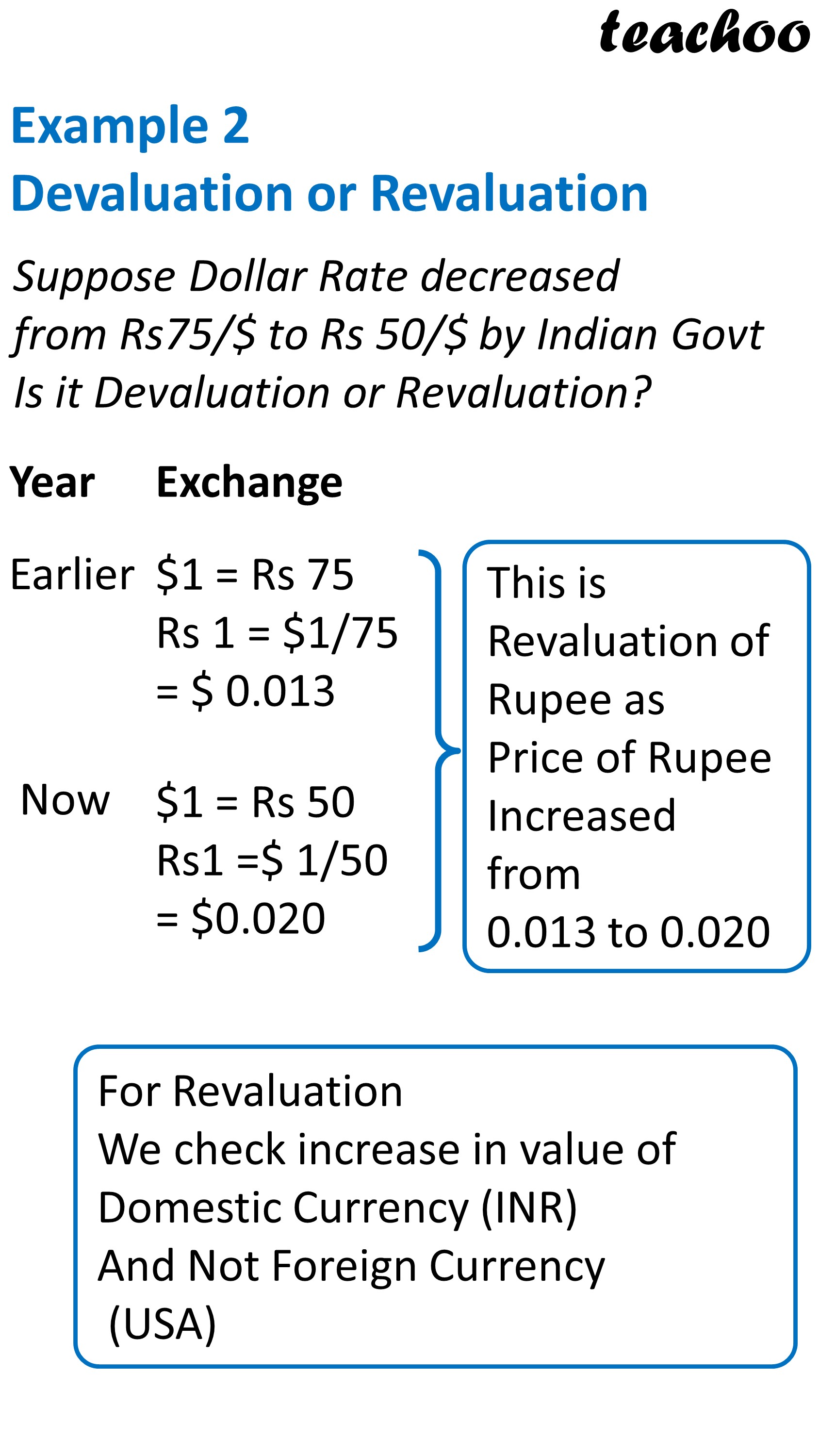 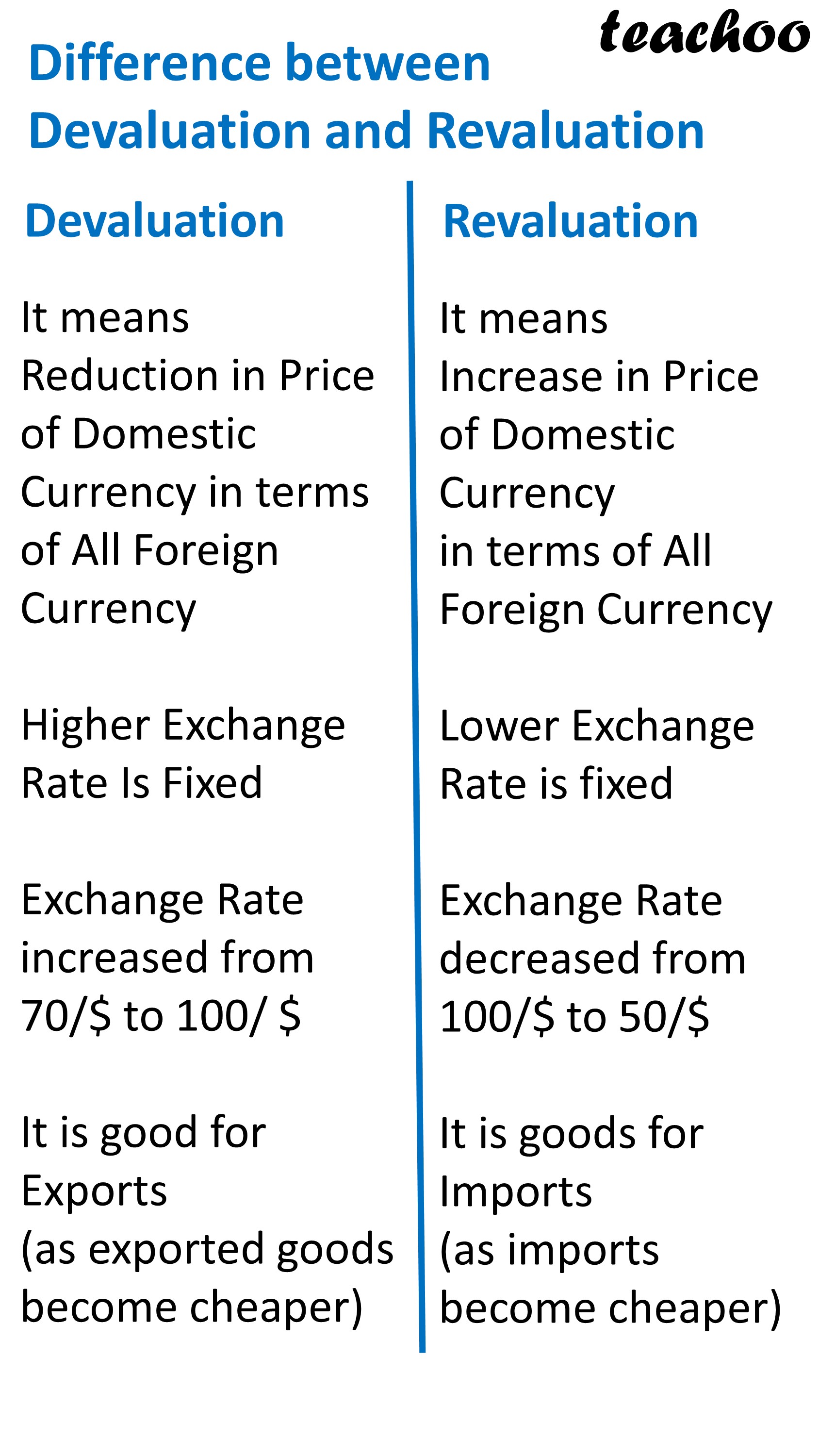 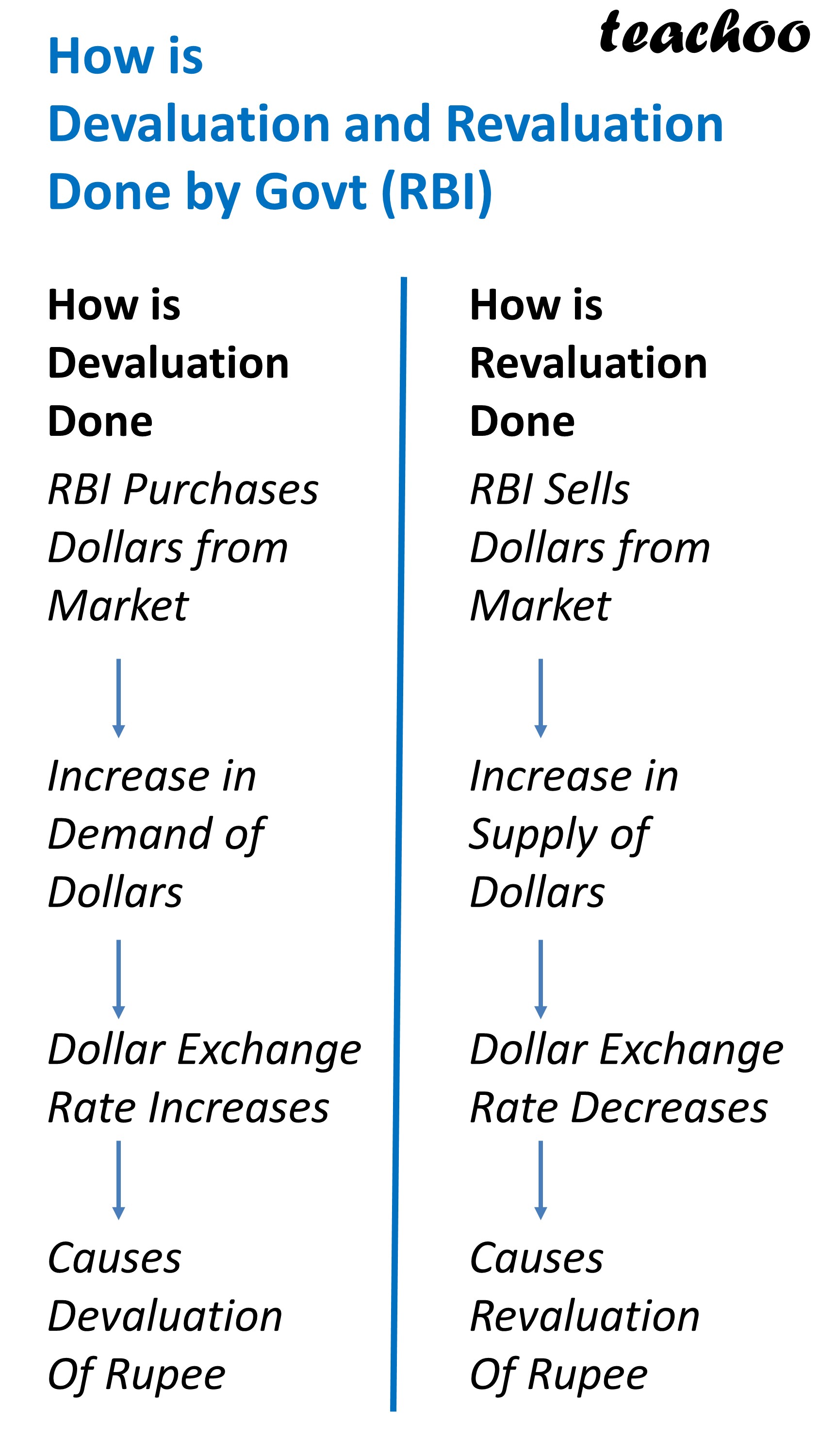 When is Devaluation Done

If Govt Wants to increase Exports

It will fix Higher Exchange Rate

Hence, it will make domestic currency cheaper as compared to foreign currency and in turn domestic goods cheaper

There will be excess supply of foreign currency in the market

To prevent this, Govt will Purchase Foreign Currency

When is Revaluation done

Hence, it will increase value of domestic currency cheaper as compared to foreign currency

For doing this, Govt will Sell Foreign Currency

Exchange Rate does not fluctuate daily

This is done to ensure stability in foreign trade

Saudi Arabia has pegged its currency Riyal to Dollar since 2003

Price of gold in terms of dolar fixed at $ 60/gram

Differentiate between devaluation and depreciation

If inflation is higher in country A than in Country B, and the exchange rate between the two countries is fixed,

what is likely to happen to the trade balance between the two countries?

If inflation in country A is higher than Country B and the exchange rate is fixed.

It would be beneficial for country B to export goods to Country A.

Similarly, it would be beneficial for country A to import from country B.

So, country A will have a trade deficit as it will have more imports than exports

B. Reduction in the value of domestic currency by the government

It is done by the government

When the government wants to strengthen the rupee, it ___ foreign currency and ___ domestic currency.

This leads to fall in price of foreign currency

B. Fixing values of foreign currencies in terms of gold

Under Gold Standard System, values of all currencies were fixed in terms of gold

and then these currencies could be compared against each other

Which of the following statements is not true?

A. Depreciation of the foreign currency leads to the fall in exports.

Depreciation of home currency implies fall in the price of domestic goods for the foreign buyers.

Identify the correct pair as given in Column B by matching them with respective concepts in Column A:

Devaluation refers to fall in the value of domestic currency due to deliberate increase in foreign exchange rate by the government which follows fixed exchange rate system.

Assertion (A): When in order to buy 1 US dollar Rs 80 are needed instead of Rs 75, domestic currency shows depreciation.

Here, domestic currency shows depreciation because more rupees are to be paid to buy one US dollar.