It is medium of exchange of goods and services. 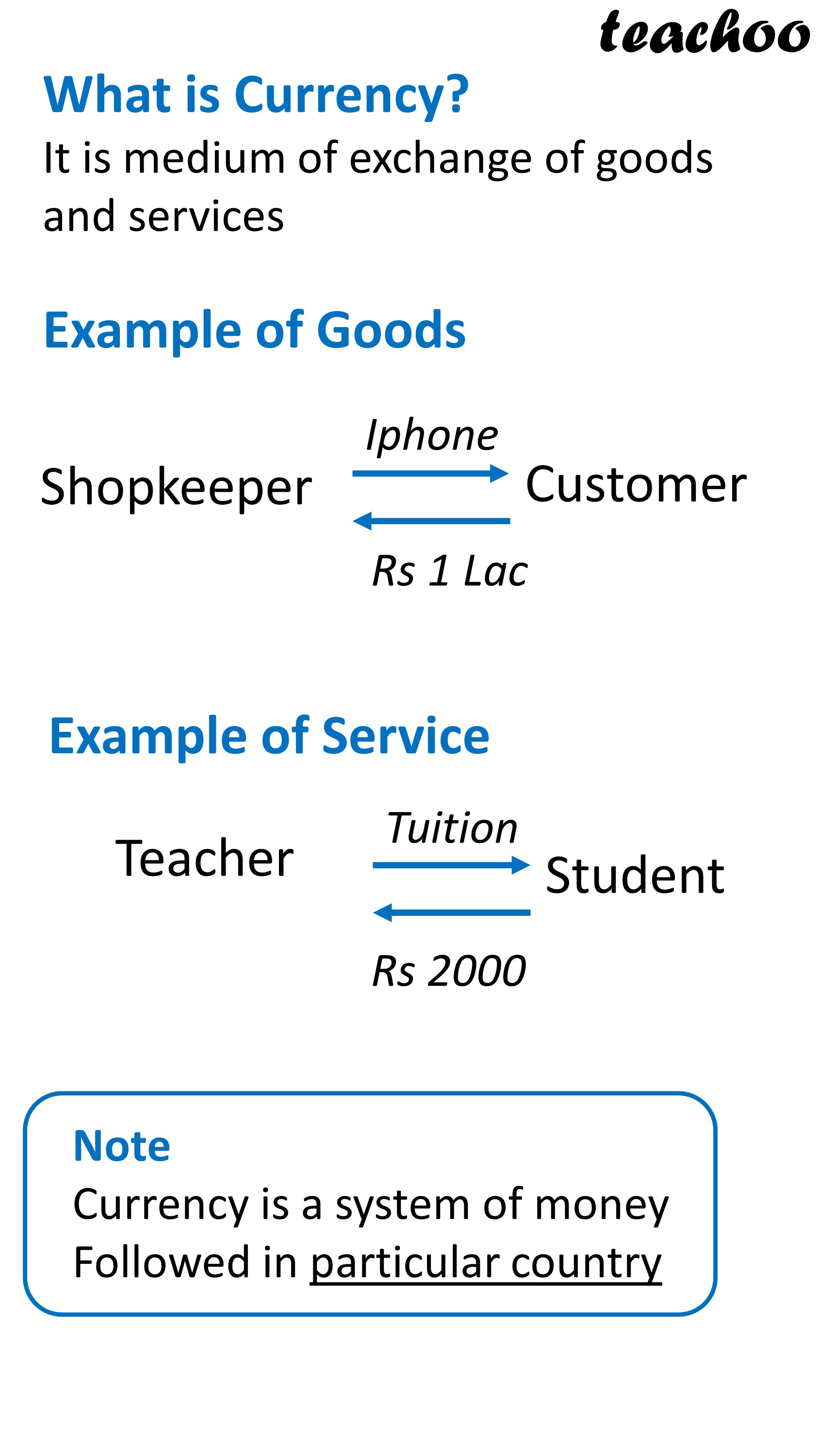 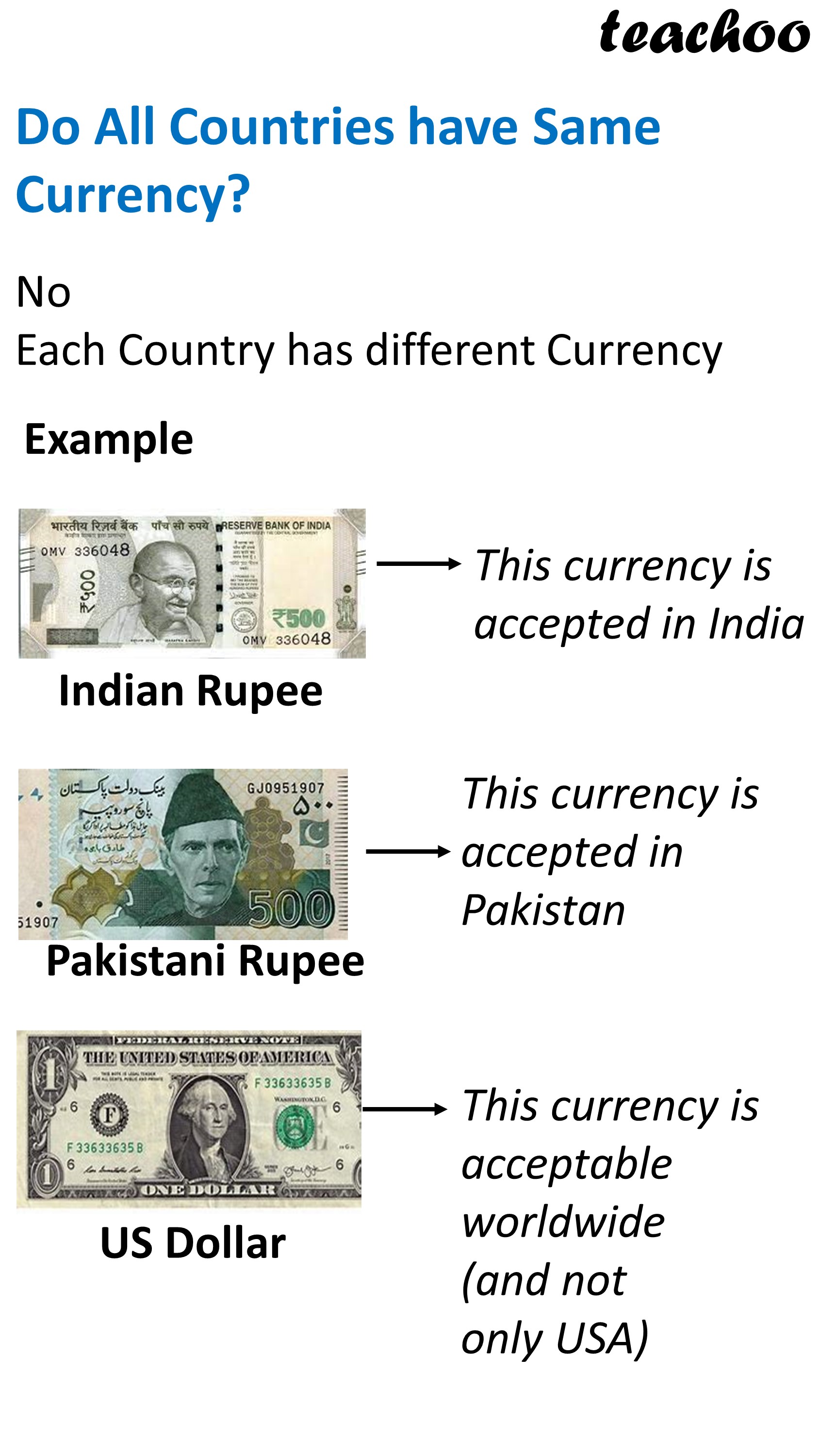 What is Foreign and Domestic Currency?

Currency which is used in own country is called Domestic Currency

All currencies other than domestic currency is called Foreign Currency 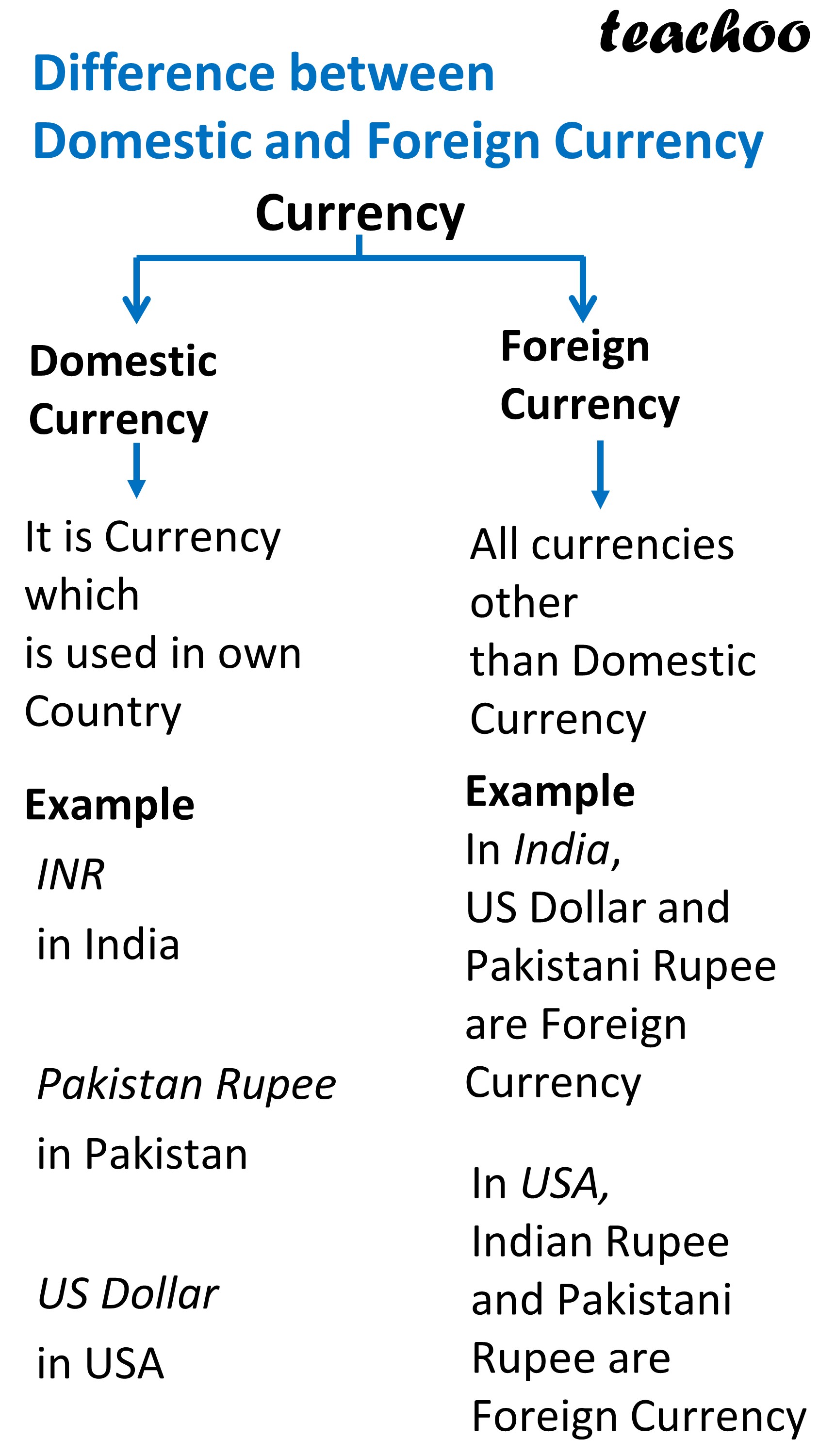 In what currency Foreign Trade happens?

Domestic Currencies like INR are not accepted for foreign trade 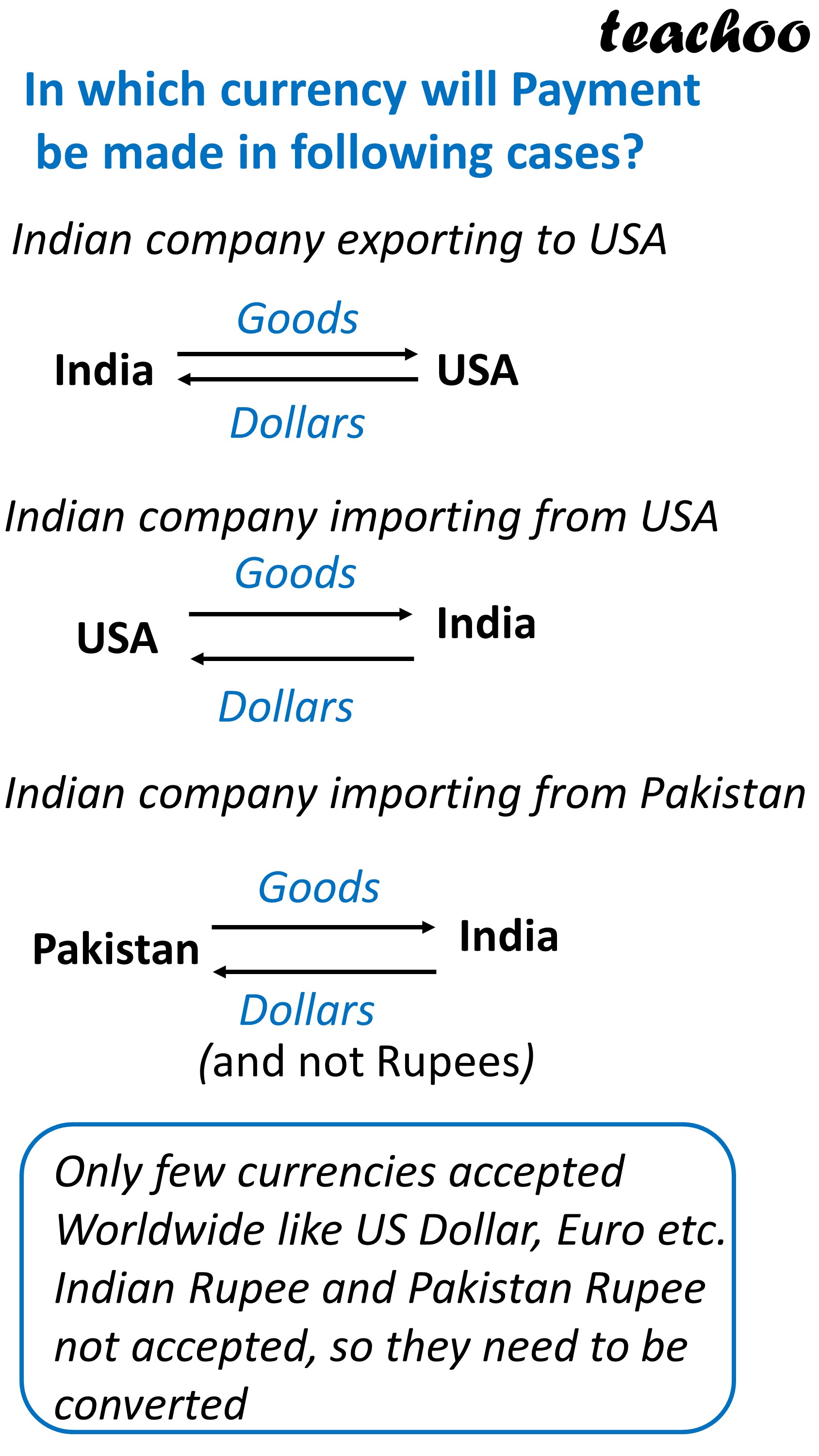 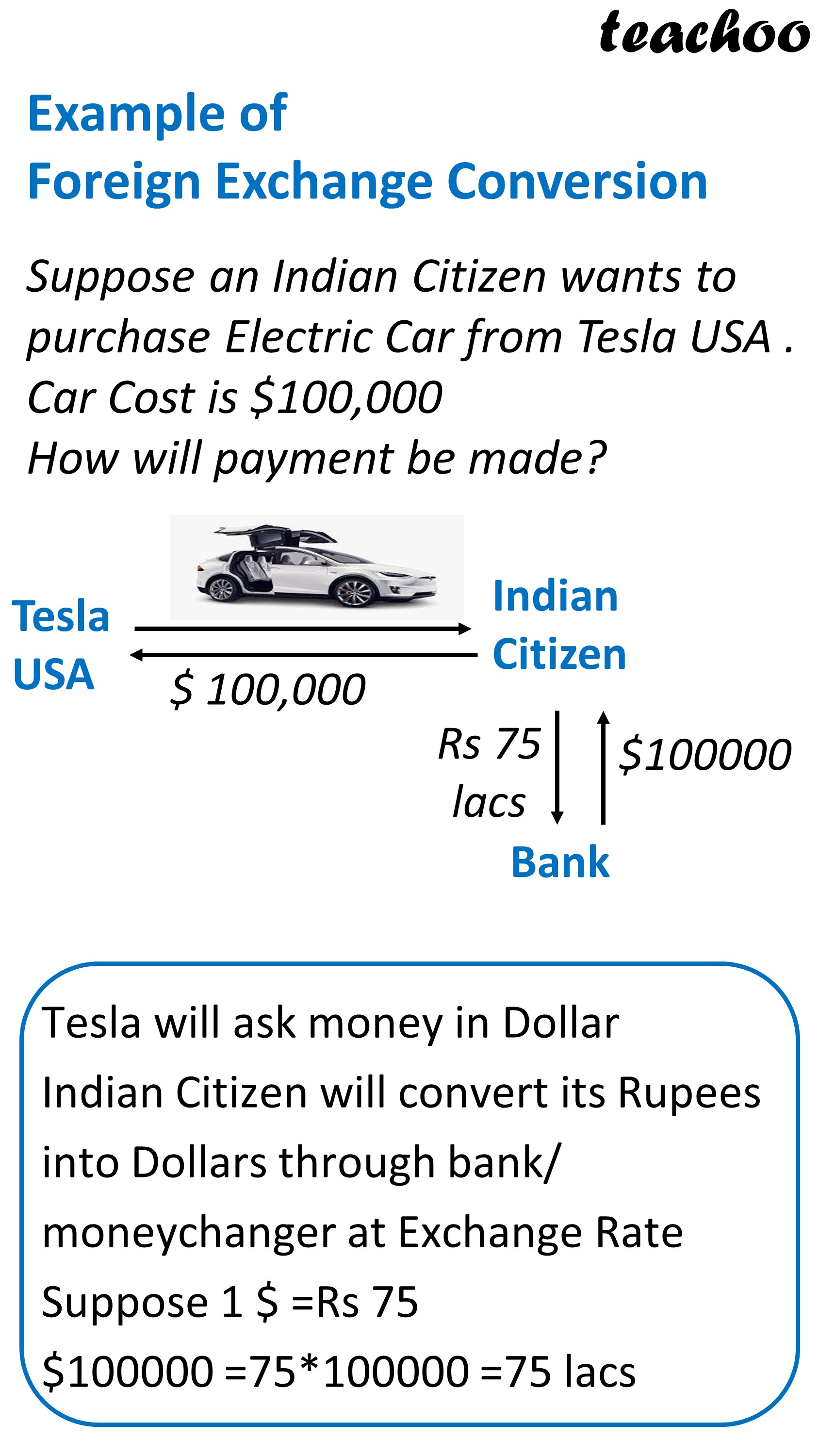 What is Foreign Exchange Rate?

It is the price of one currency in terms of another 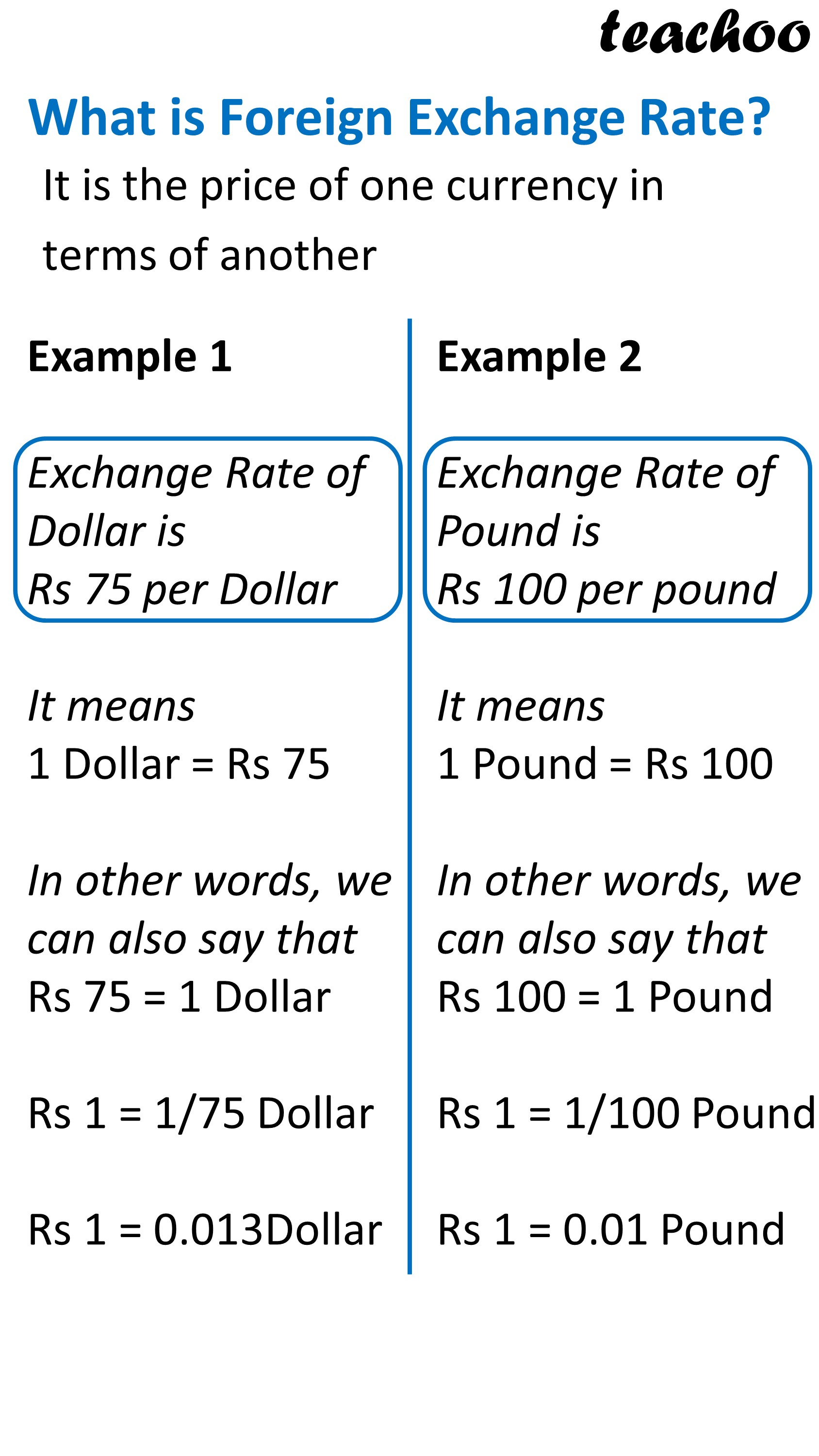 What is Foreign Exchange Market?

It has 3 major Participants: 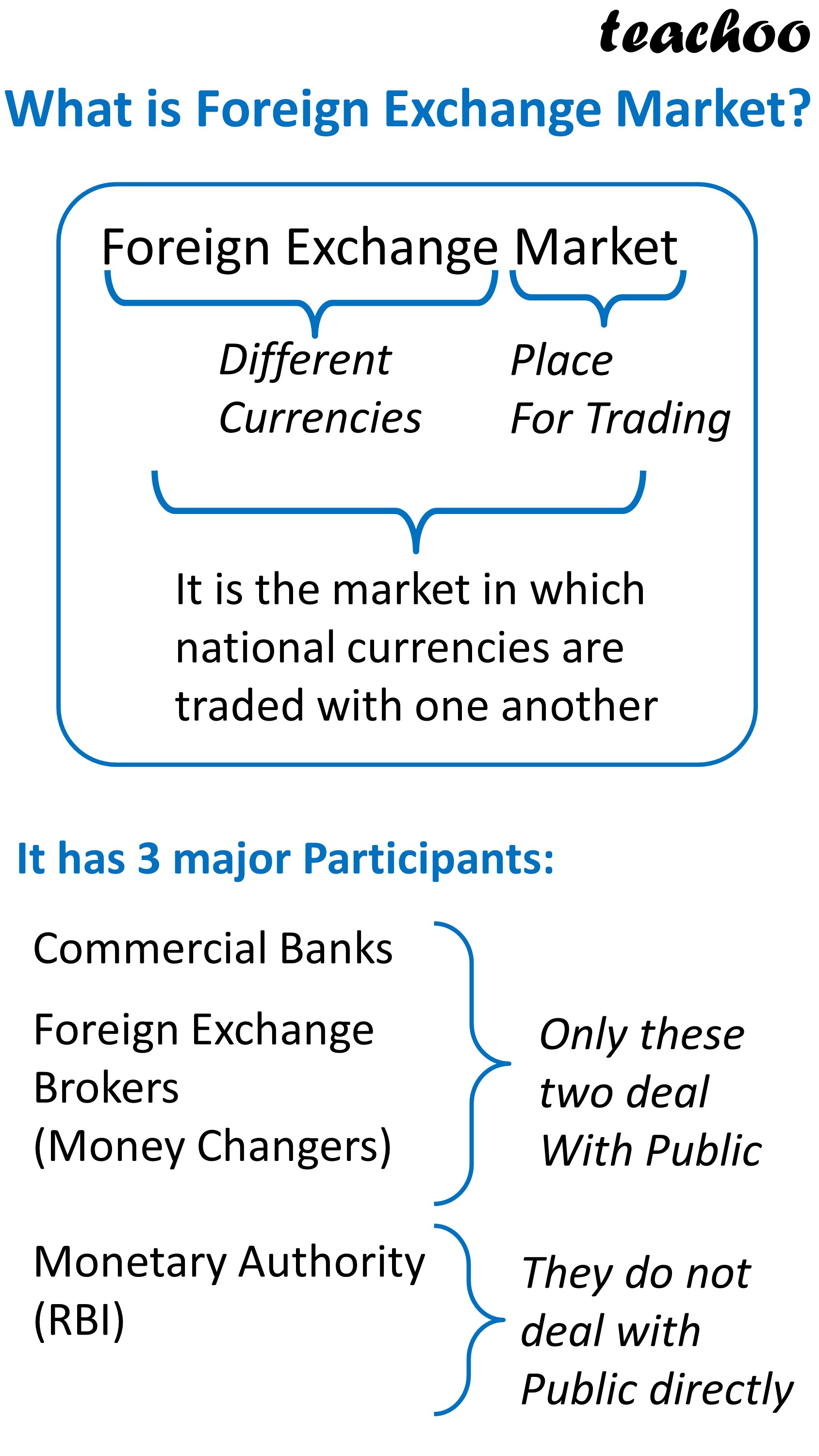 Suppose a Person wants to exchange his Rupees with Dollar, he will approach his Bank/Money Exchange Agent

What is purpose of Foreign Exchange Rate/Market?

It links currencies of different countries.

(What is the cost of one currency in terms of other?)

It enables comparison of international cost and price 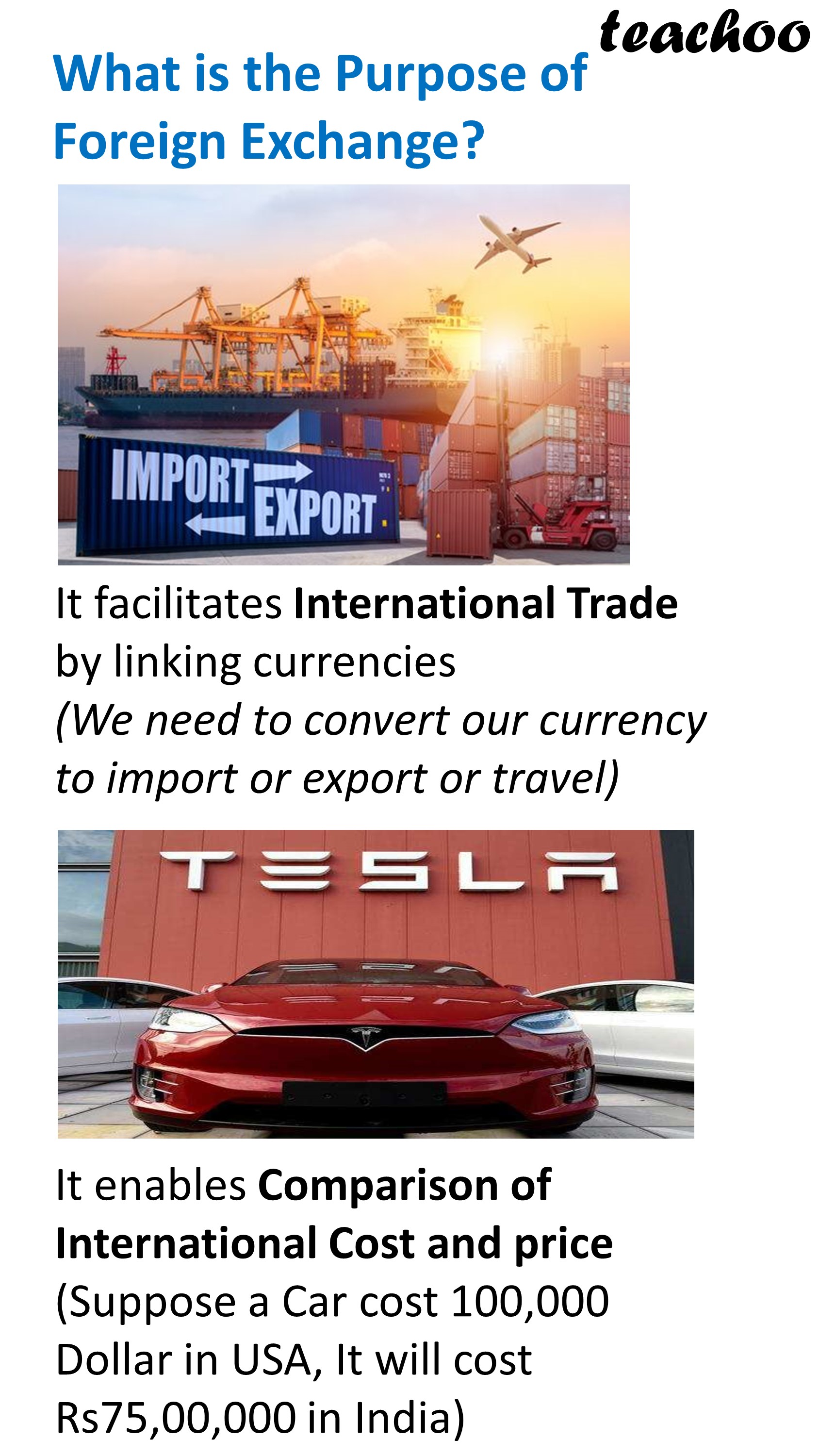 By 'Exchange Rate' we mean:

D. All of these

What is Foreign Exchange Rate?

It is the price of one currency in terms of another

Exchange Rate of Dollar is Rs70 per Dollar

In other words, we can say that

C. the price of one currency in relation to other currencies in the international money market.

Exchange rate is the price of a currency expressed in terms of:

It is the rate at which one currency can be converted into another currency.

What is Currency? It is medium of exchange of goods and services Example of Goods Shopkeeper Iphone Customer Example of Service Teacher Student Rs 2000 Note Currency is a system of money Followed in particular country Do All Countries have Same Currency? No Each Country has different Currency Example This currency is accepted in India This currency is accepted in Pakistan Pakistani Rupee US Dollar This currency is acceptable worldwide (and not only USA) Difference between Domestic and Foreign Currency CurrencyDomestic Currency Foreign Currency It is Currency which is used in own Country All currencies other than Domestic Currency Example INR in India Pakistan Rupee in Pakistan US Dollar in USA Example In India, US Dollar and Pakistani Rupee are Foreign Currency In USA, Indian Rupee and Pakistani Rupee are Foreign Currency In which currency will Payment be made in following cases? Indian company exporting to USA India Goods Dollars USA Indian company importing from USA USA Goods India Indian company importing from Pakistan Pakistan Goods (and not Rupees) India Only few currencies accepted Worldwide like US Dollar, Euro etc. Indian Rupee and Pakistan Rupee not accepted, so they need to be converted Example of Foreign Exchange Conversion Suppose an Indian Citizen wants to purchase Electric Car from Tesla USA . Car Cost is $100,000 How will payment be made?Tesla USA Indian Citizen $ 100,000 Rs 75 lacs $100000 Bank Tesla will ask money in Dollar Indian Citizen will convert its Rupees into Dollars through bank/ moneychanger at Exchange Rate Suppose 1 $ =Rs 75 $100000 =75*100000 =75 lacs What is Foreign Exchange Rate?It is the price of one currency in terms of another Example 1 Exchange Rate of Dollar is Rs 75 per Dollar It means 1 Dollar = Rs 75 In other words, we can also say that Rs 75 = 1 Dollar Rs 1 = 1/75 Dollar Rs 1 = 0.013Dollar Example 2 Exchange Rate of Pound is Rs 100 per pound It means 1 Pound = Rs 100 In other words, we can also say that Rs 100 = 1 Pound Rs 1 = 1/100 Pound Rs 1 = 0.01 Pound What is the Purpose of Foreign Exchange?It facilitates International Trade by linking currencies (We need to convert our currency to import or export or travel) It enables Comparison of International Cost and price (Suppose a Car cost 100,000 Dollar in USA, It will cost Rs75,00,000 in India) What is Foreign Exchange Market? Foreign Exchange MarketDifferent Currencies Place For Trading It is the market in which national currencies are traded with one another It has 3 major Participants: Commercial Banks Foreign Exchange Brokers (Money Changers) Monetary Authority (RBI) Only these two deal With Public They do not deal with Public directly