Hence, in this case

We take total expenditure (both Revenue and Capital) 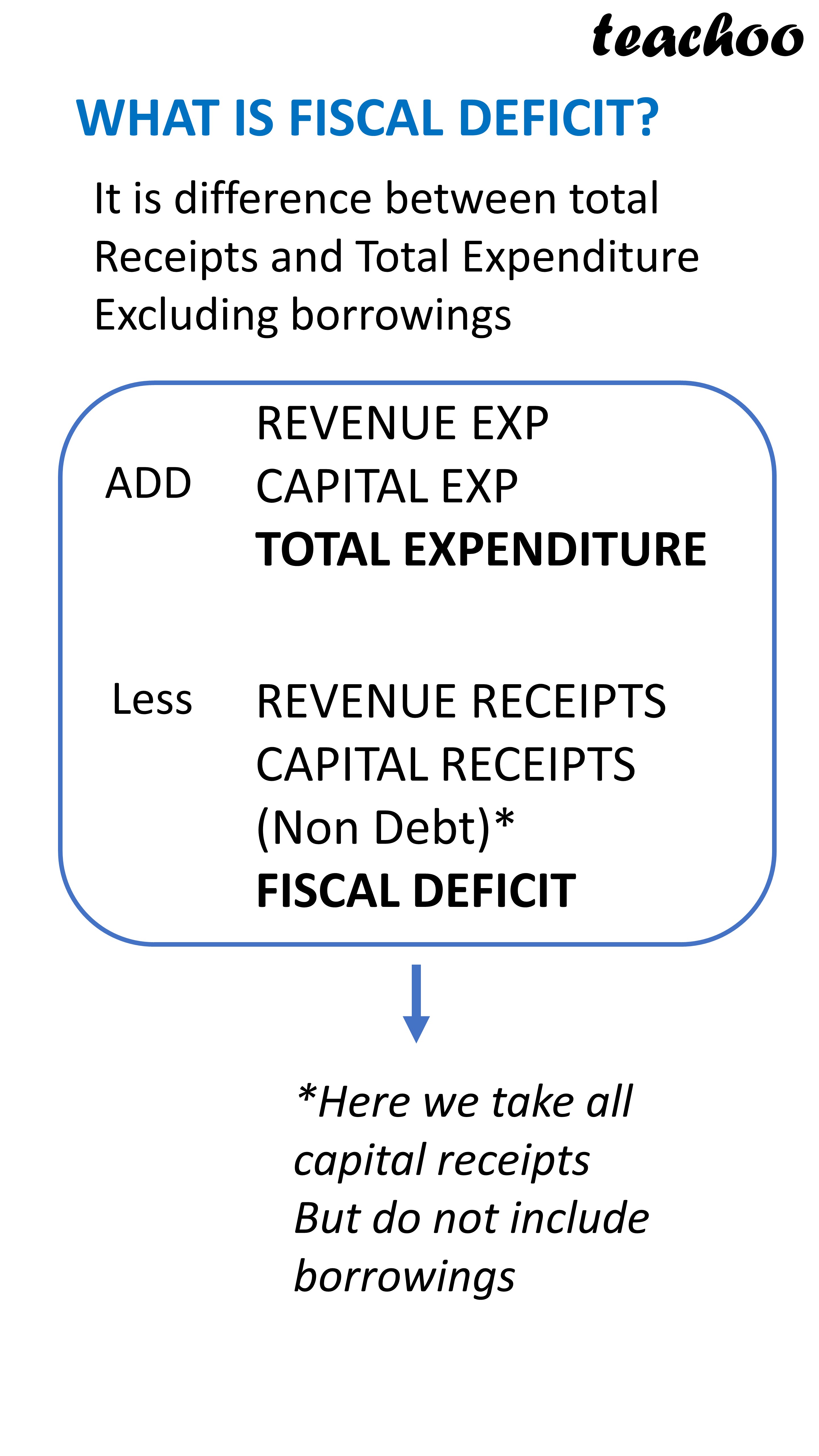 Recovery of loan given by Central Govt to State govt etc

Loan taken by Central Govt (from RBI, Outside country, Public)

(We take them while calculating Fiscal Deficit)

And last one is called Debt Creating Capital Receipt

(We exclude it while calculating Fiscal Deficit) 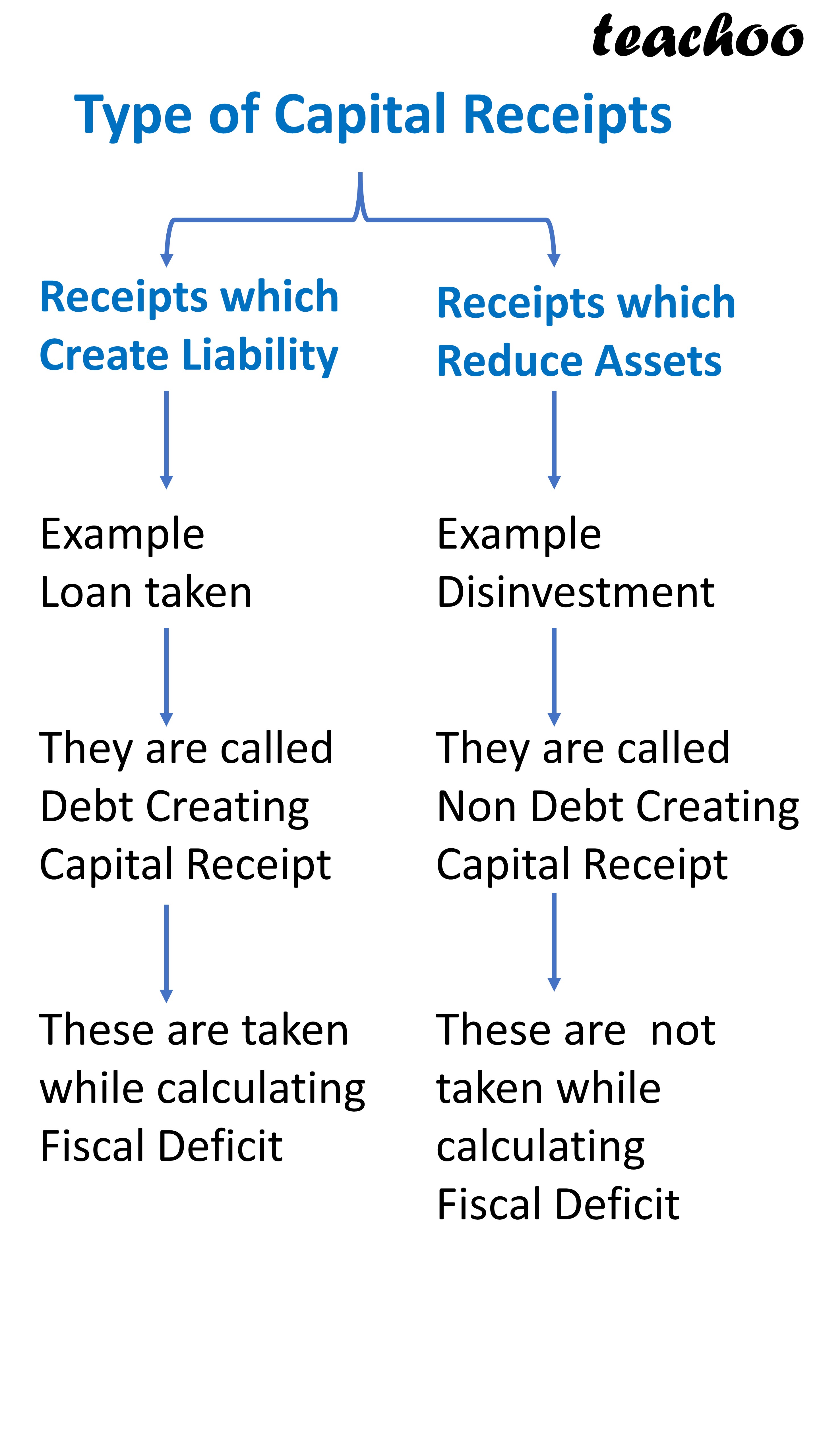 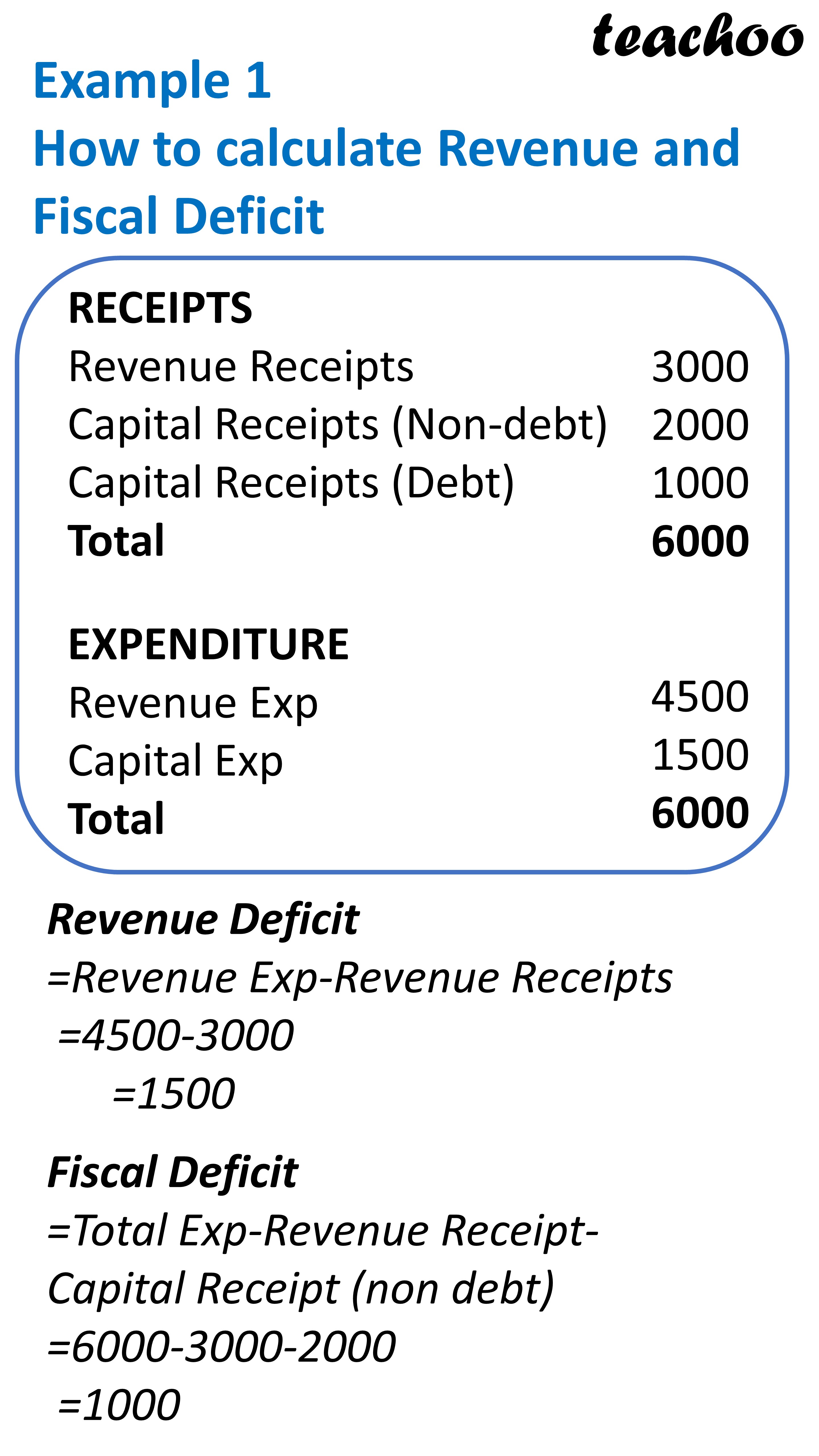 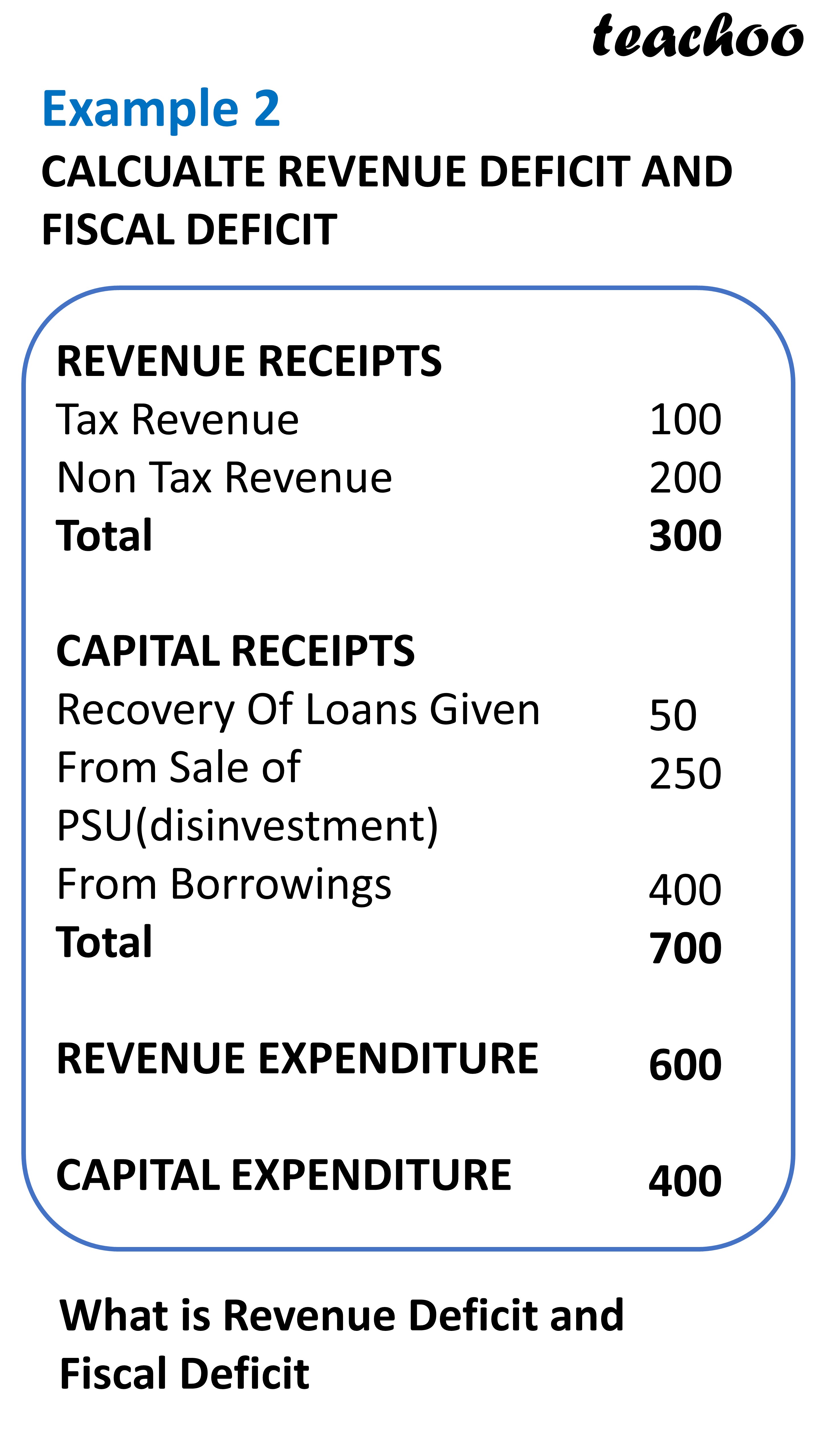 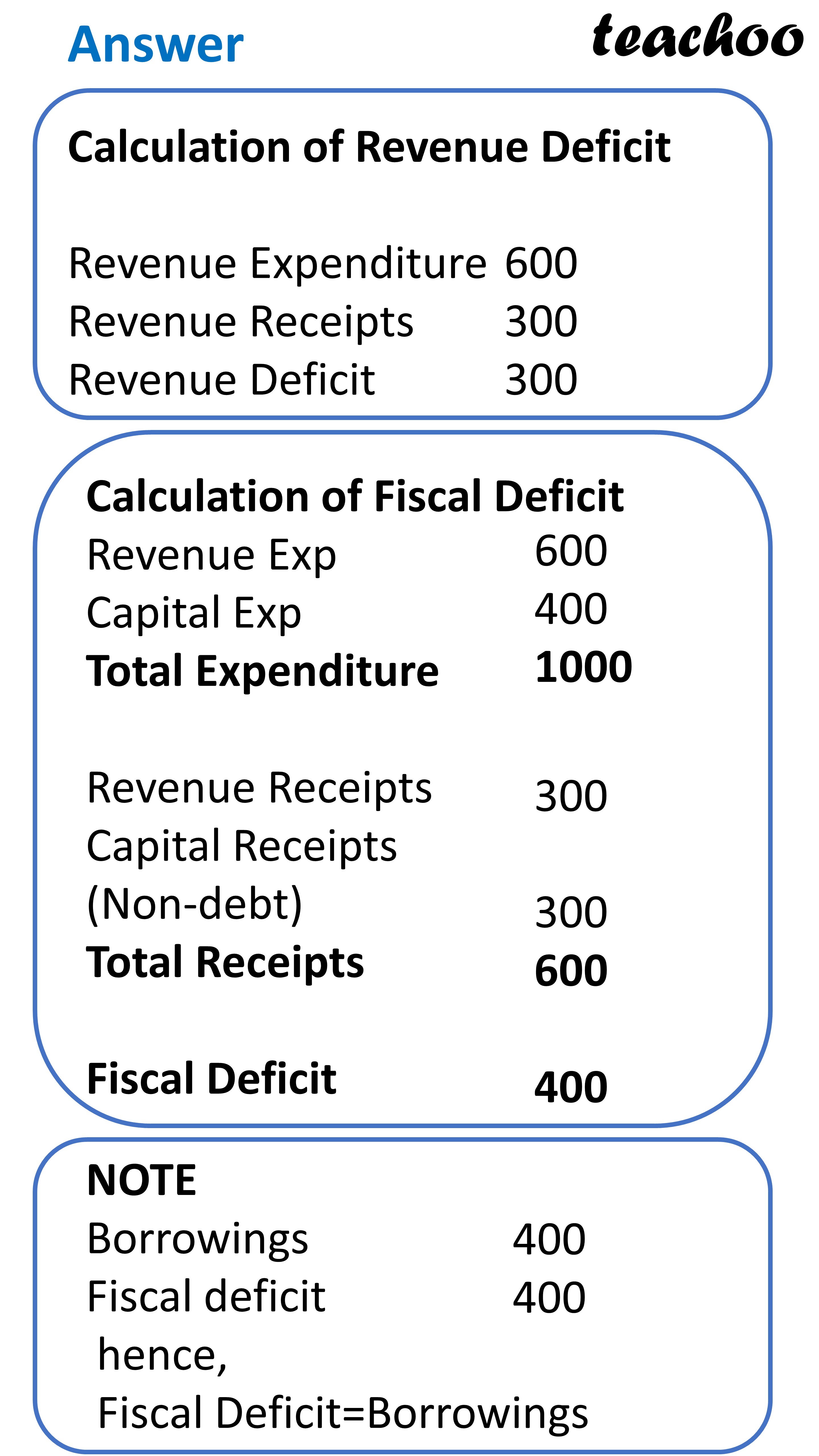 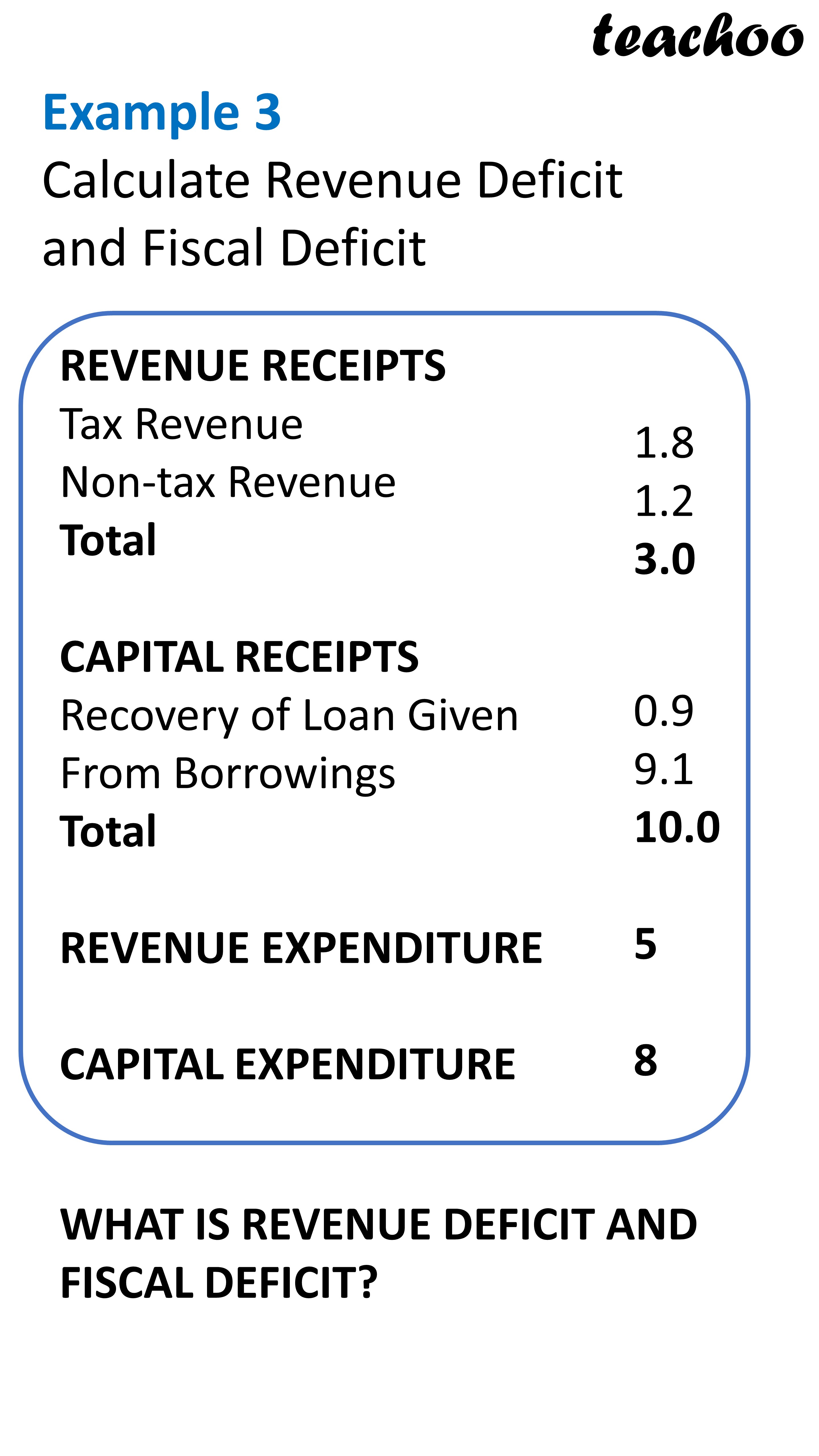 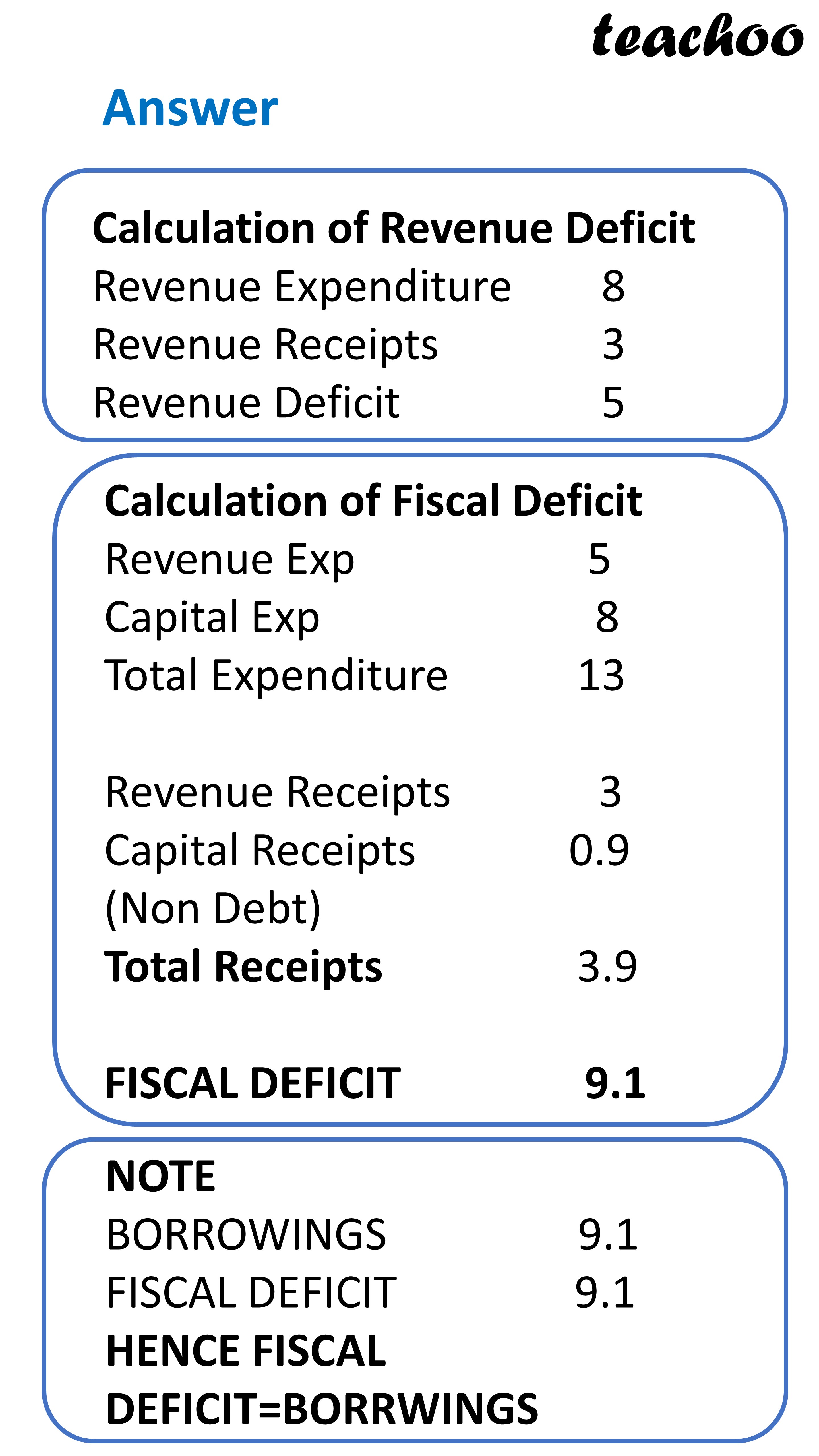 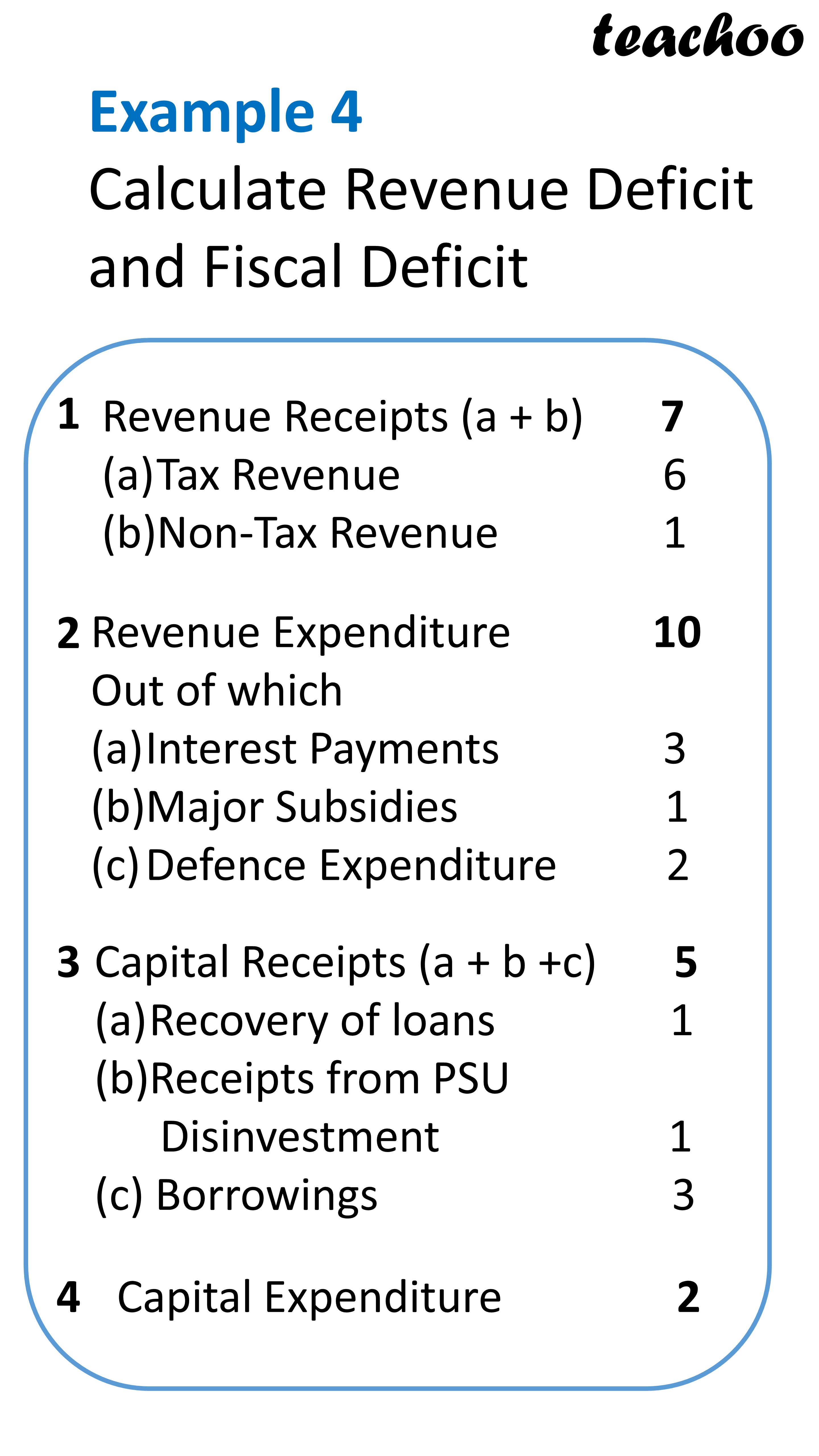 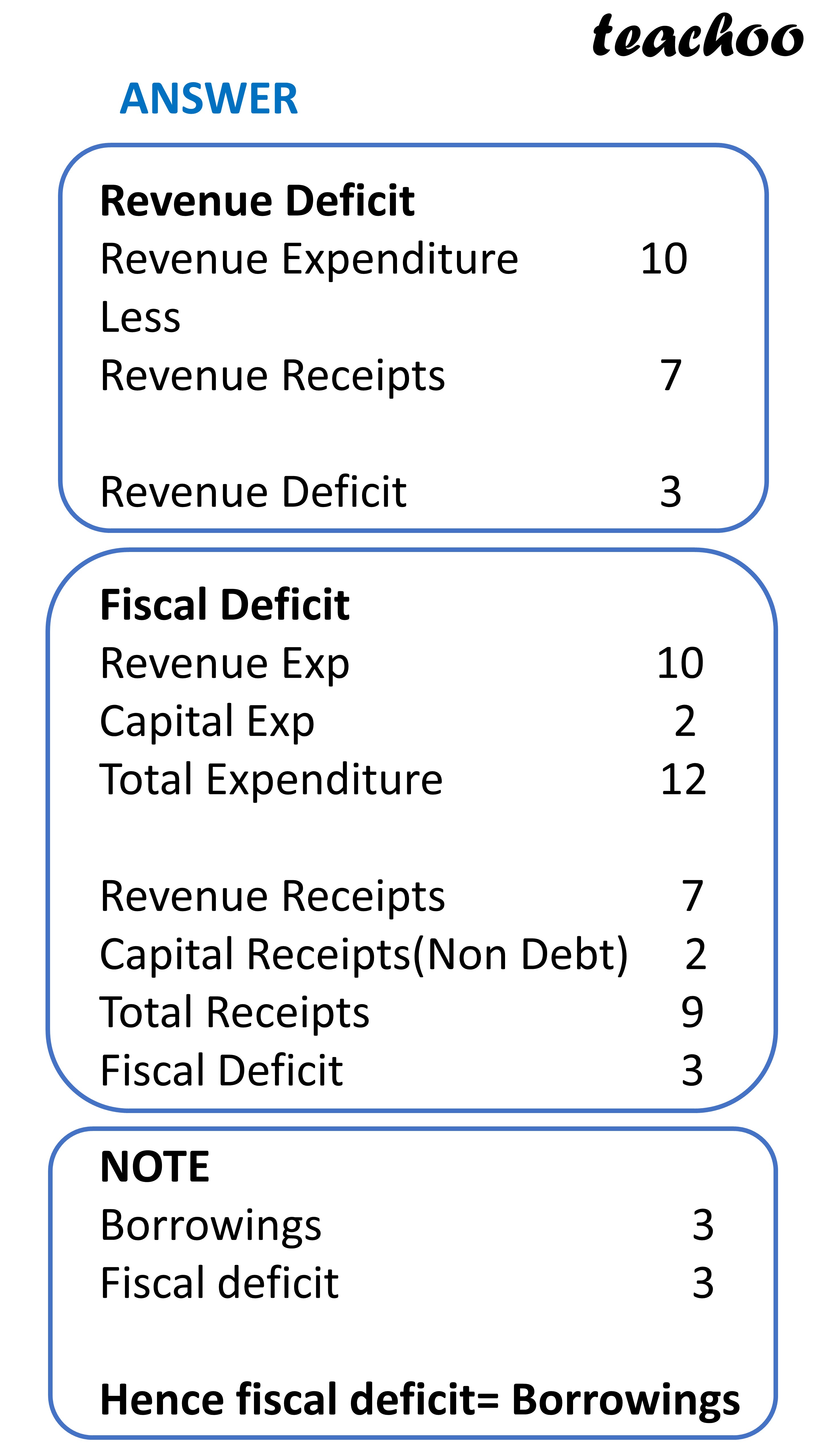 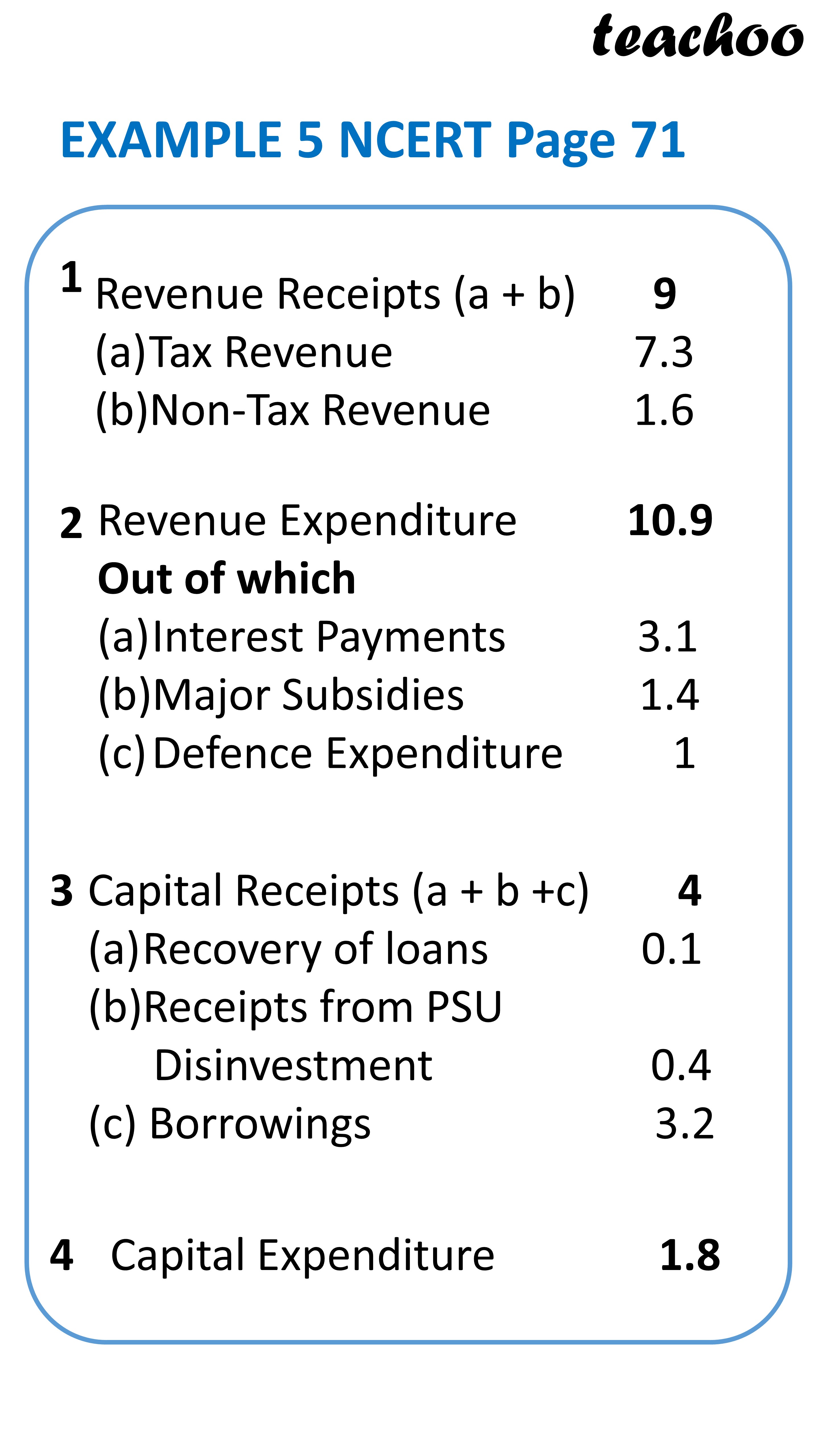 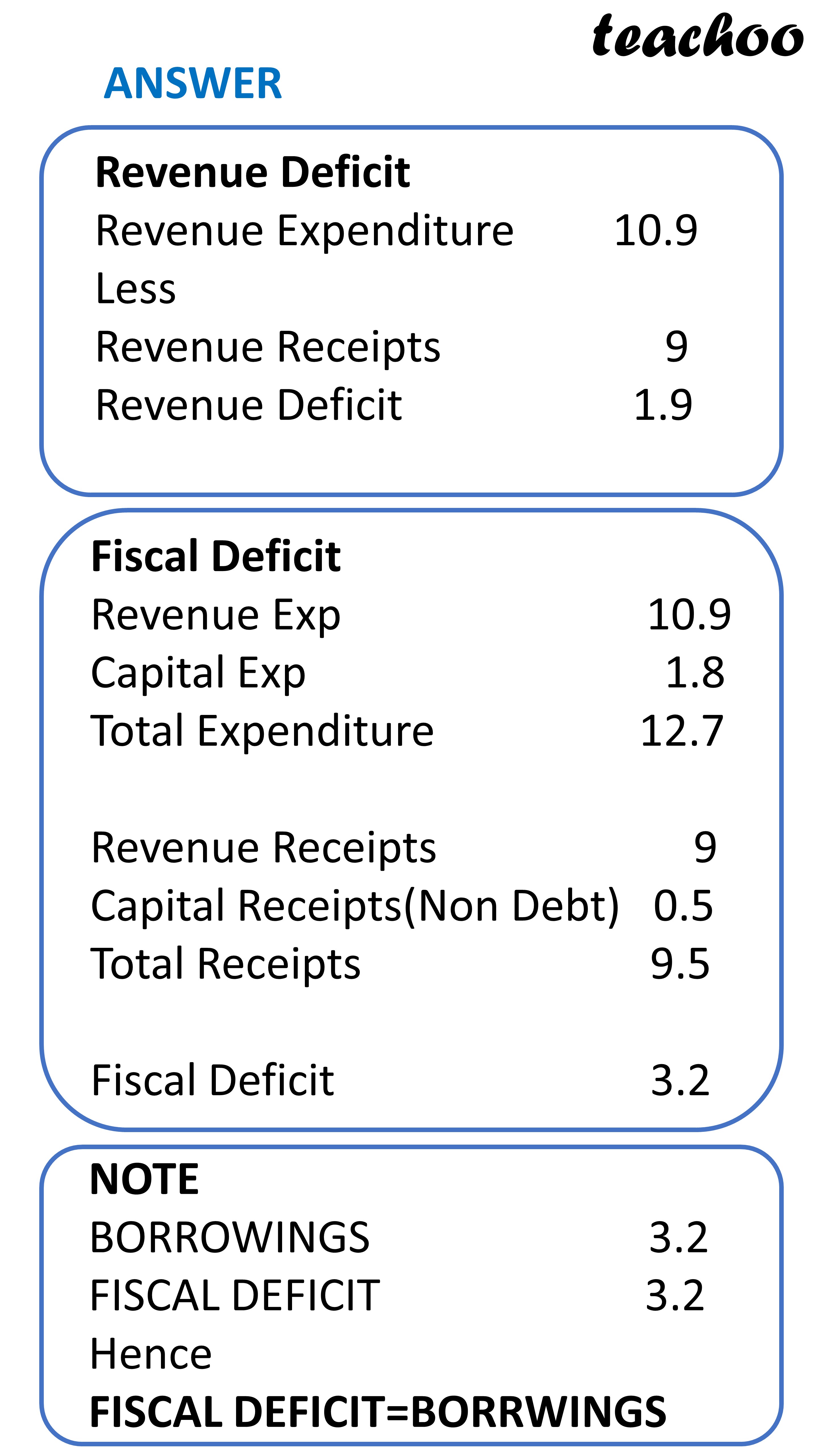 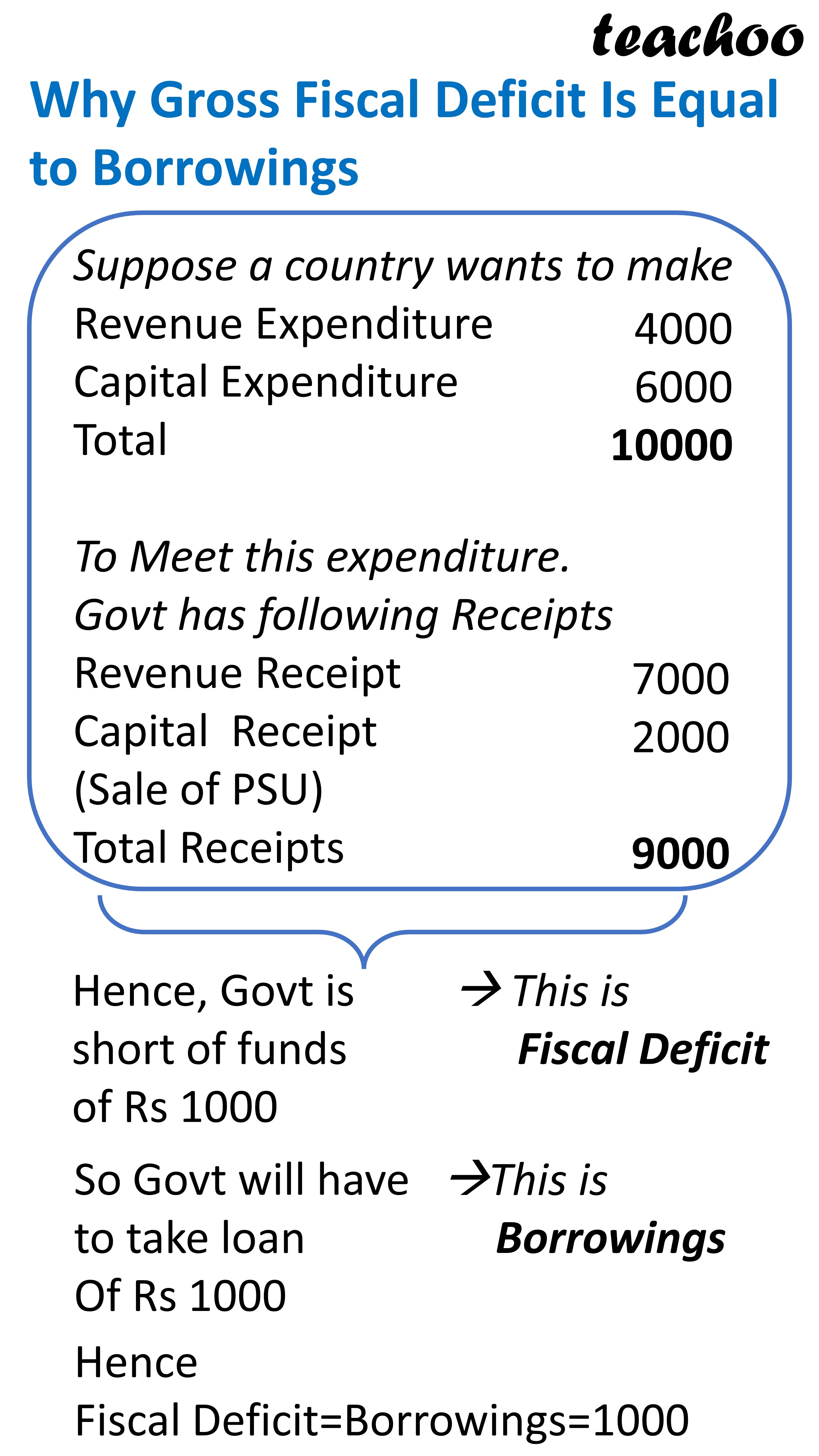 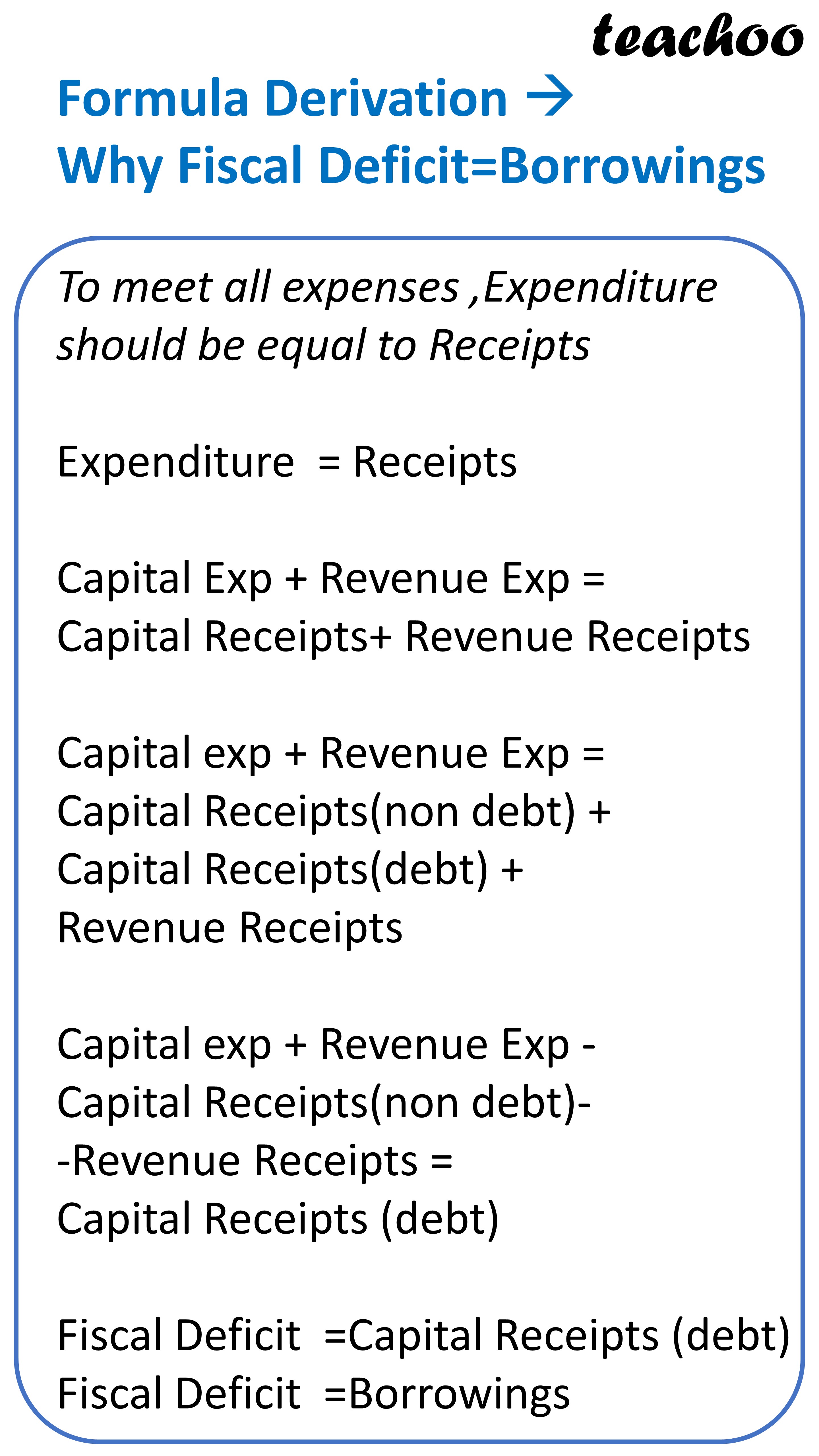 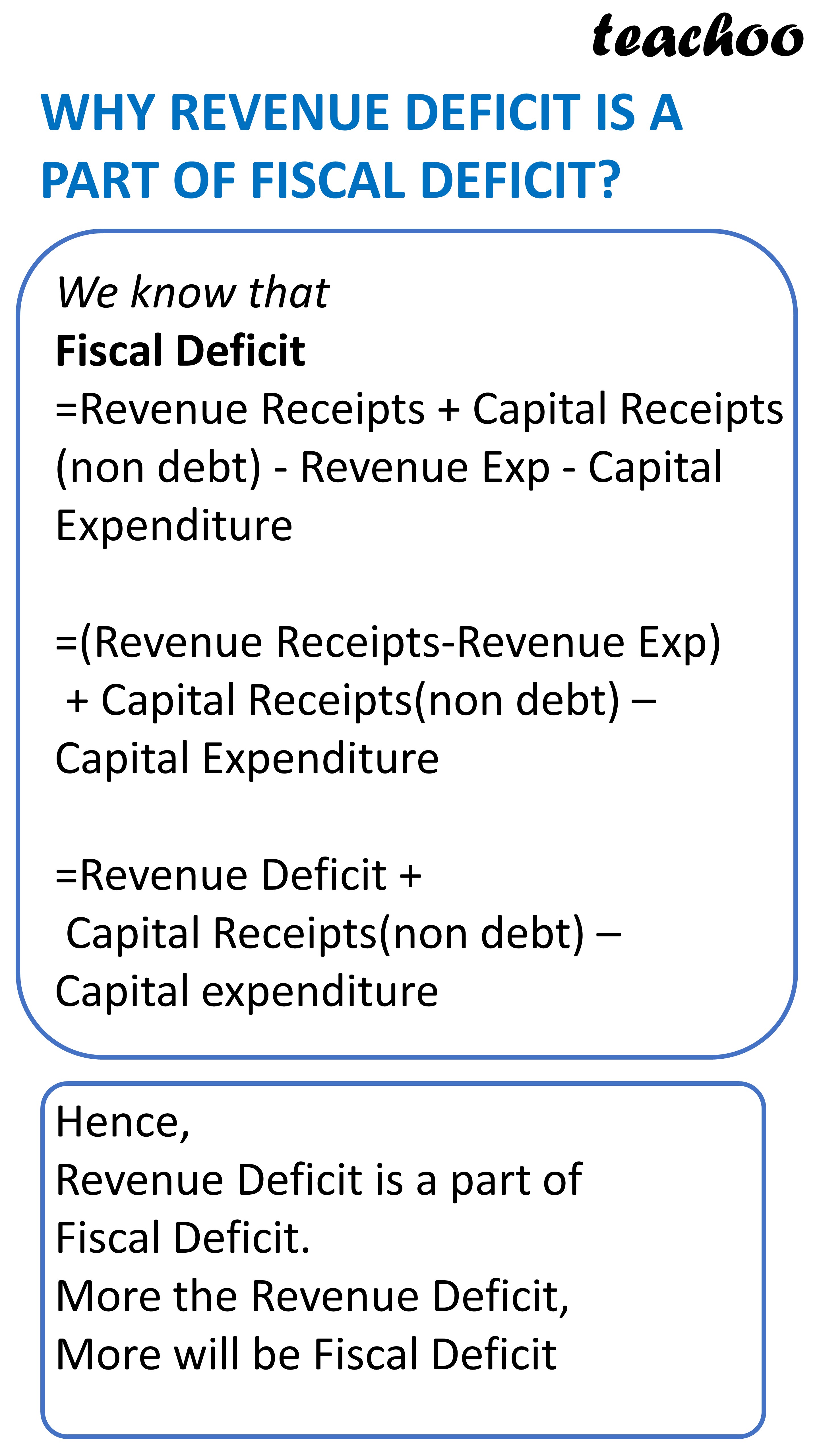 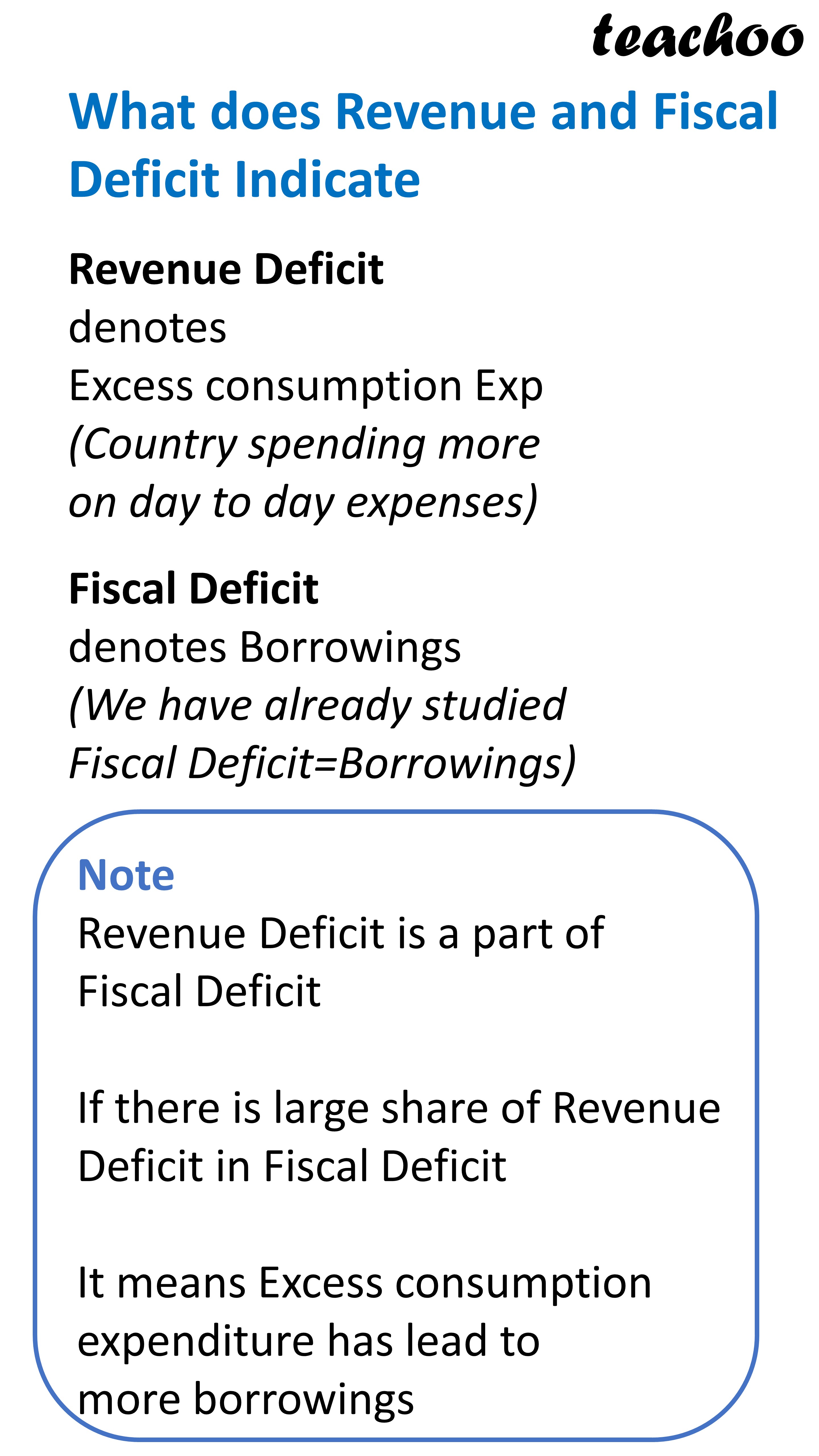 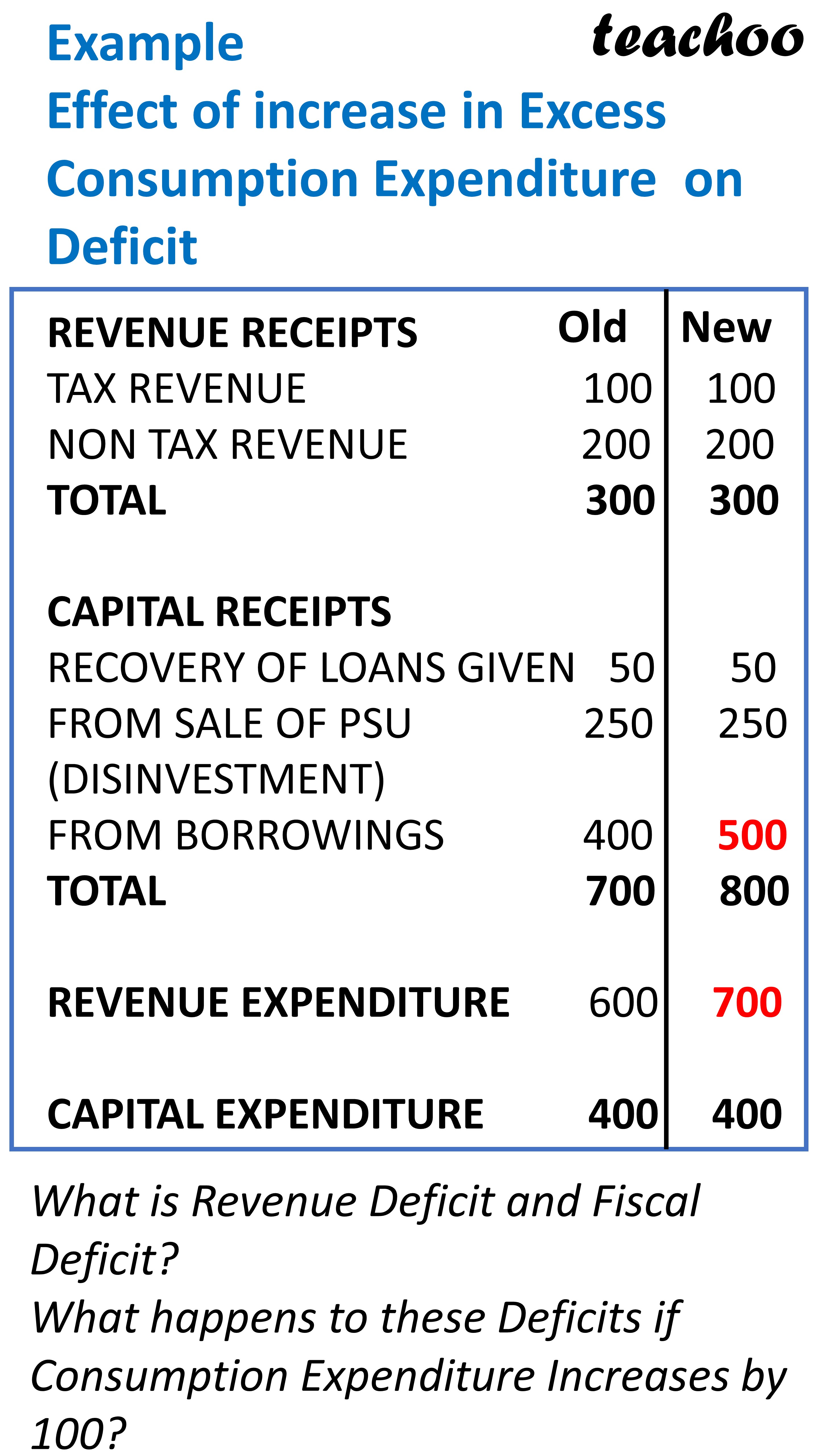 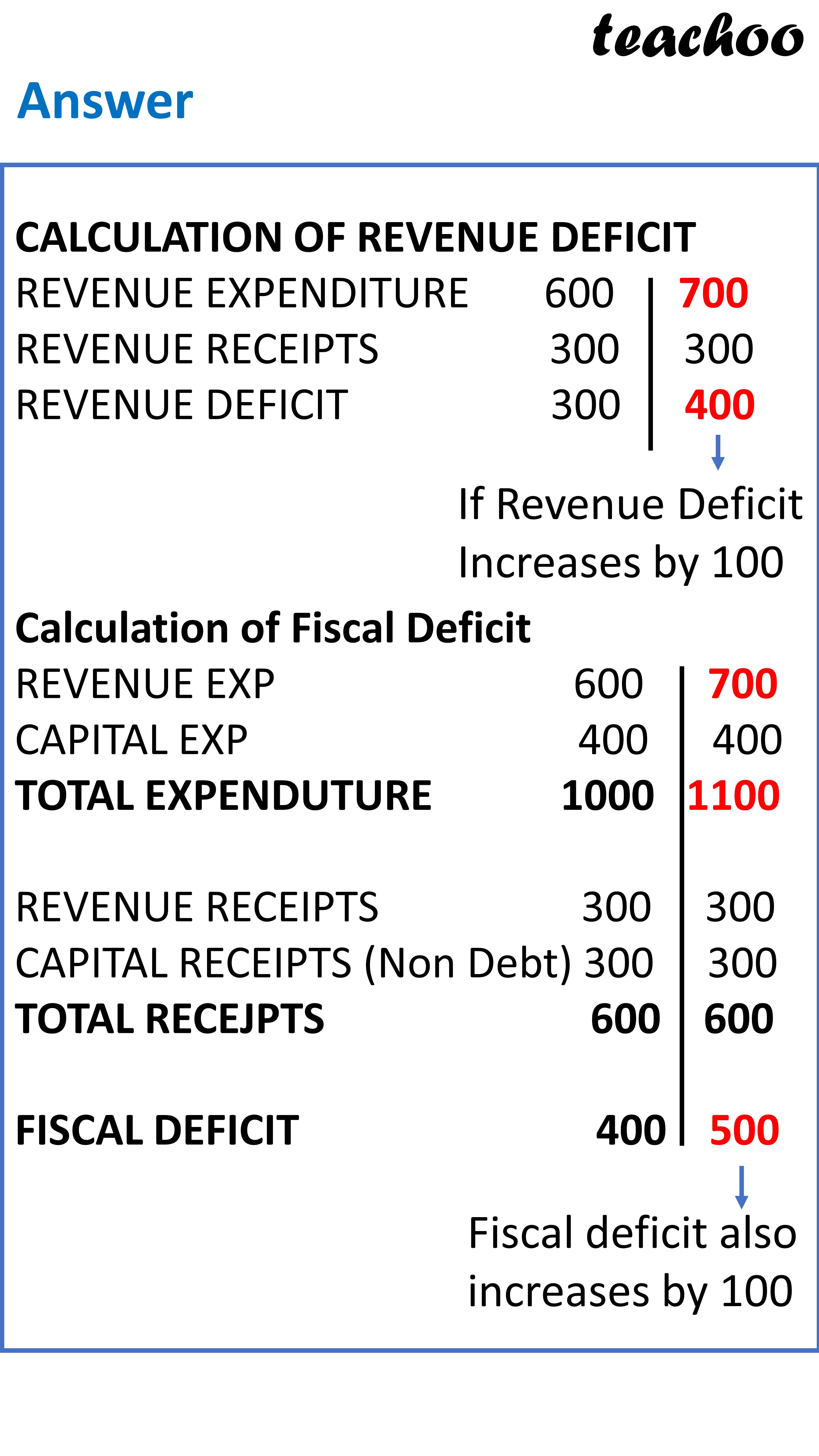 ‘The fiscal deficit gives the borrowing requirement of the government’.

It gives an indication to the government about the total borrowing requirements from all sources.

Give the relationship between the revenue deficit and the fiscal deficit.

Borrowings are equivalent to:

In a government budget, revenue deficit is Rs50,000 crores and borrowings are Rs75,000 crores.

The fiscal deficit will be:

Fiscal Deficit is equal to borrowings.

Which of the following statement is not true for fiscal deficit?

B. is the difference between total expenditure and total receipts of the government

Which of the following statements is true?

C. The loans taken by government represents a situation of fiscal deficit.

Fiscal deficit is defined as the amount of borrowing the government has to resort to meet its expenses.

Assertion (A): Fiscal deficit is the difference between primary deficit and interest payment.

It indicates borrowing requirements of the government.

Read the news report given below and answer the questions that follow:

The Finance Minister Nirmala Sitharaman has proposed a sharp 34.5 per cent hike in capital expenditure to Rs5.54 lakh crore in financial year 2022 in order to push growth.

The massive increase comes at a time when the country is looking to recover from the Covid pandemic, as rising government spending is key to bringing the economy back on track.

The government will also provide an additional Rs2 lakh crore to states for capital expenditure over and above its own commitment.

We will also work out specific mechanism to nudge states to spend more of their Budget on creation of infrastructure, Ms. Sitharaman said.

The finance minister said that the government will launch a national asset monetisation pipeline which includes the sale of oil and gas pipelines, power transmission lines and operation of toll roads under the National Highway Authority of India.

This year's budget, according to the government, rests on six pillars: health and well-being, physical and financial capital and infrastructure, inclusive development for aspirational India, reinvigorating human capital, innovation and research and development, and "minimum government, maximum governance," the finance minister had asserted

Why has the Finance ministry hiked the Capital Expenditure?

Capital expenditure is the money spent by the government on the development of machinery, equipme

Which objective of the Government Budget does the increase in capital expenditure serve?

D. All of the above

What problem can the increase in this Capital Expenditure create?

Join Teachoo Black
Next: What is Primary Deficit? →
Facebook Whatsapp