Suppose we want to kick a football.

By kicking the ball, we made the object move away from ourselves.

This is known as push

Applying force in a direction towards us is known as pull

We can also move object towards us by applying Force.

Like, we can use force to open a drawer.

This is known as pull 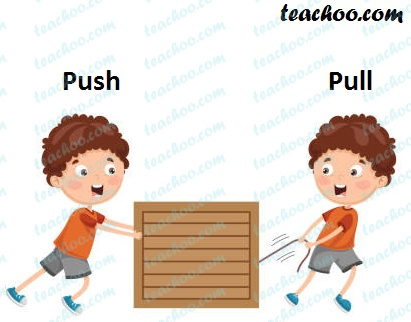 Difference between Push and Pull

Push or pull applied on object is called Force

When we push the door,we apply force

Similarly when we pull the door.,we apply force

Suppose we want to kick a football.

If we kick it slowly, the ball will travel less distance.

But, if we kick it hard, the ball travels more distance.

What is the difference between kicking slowly and kicking hard?

if we kick a bowl slowly,we apply less force

If we kick a ball hard,we apply more force

NCERT Question 3 (a) - Fill in the blanks in the following statements: