Answer any four question from (a) - (e) on the basis of your understanding of the following paragraph and the related studied concepts.

Renewable energy sources such as wind energy are vital for the Indian economy, not only from the point of view of supply, but also from the perspective of environmental and social benefits. India is the world’s fifth largest wind-power producer and the largest windmill facilities in India are installed in Tamil Nadu. Muppandal is a small village of Tamil Nadu and one of the most important sites of wind-farm in the state. It uses wind from the Arabian Sea to produce renewable energy. The suitability of Muppandal as a site for wind farms stems from its geographical location as it has access to the seasonal monsoon winds. 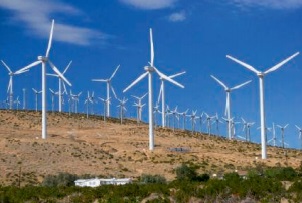 The electrical generators used on wind turbines in sites like Muppandal, produce an output AC of 240 V and a frequency of 50 Hz even when the wind speed is fluctuating. A transformer may be required to increase or decrease the voltage so it is compatible with the end usage, distribution or transmission voltage, depending on the type of interconnection.

The output frequency of wind turbine is 50 Hz. Which of the following does not explain this statement?

(i) The fan of turbine moves 50 times in one second

(ii) In one second the output AC completes 50 cycles

(iii) The polarity of the output alternating current changes every 1/100 seconds.

(iv) In one minute the output AC completes 50 cycles

The output frequency of wind turbine is 50 Hz, this indicates that

Which of the following device does not work on the principle of electro magnetic induction:

Devices that work on the principle of electromagnetic induction are:

So, we understand that the electric bulb does not work on the principle of electromagnetic induction.

So, the correct answer is (iv)

Which device is used to increase the AC voltage to make it compatible with end user?

A transformer is used to increase the AC voltage to  make it compatible with the end user.

Which device produces the electric current?

So, the correct answer is (iv)

Fleming’s left hand and Right hand rules are used in

(i) Generator and electric motor respectively.

(iii) any rule can be used for any device.

(iv) both are not applied for generator and motor.

So, the correct answer is (ii).