Unseen Passage (with Past Year Questions)

Read the passage given below:

(1) For four days, I walked through the narrow lanes of the old city, enjoying the romance of being in a city where  history still lives—in its cobblestone streets and in its people riding asses, carrying vine leaves and palm as they once  did during the time of Christ.

(2) This is Jerusalem, home to the sacred sites of Christianity, Islam and Judaism. This is the place that houses the  church of the Holy Sepulchre, the place where Jesus was finally laid to rest. This is also the site of Christ’s crucifixion,  burial and resurrection.

(3) Built by the Roman Emperor Constantine, at the site of an earlier temple to Aphrodite, it is the most venerated  Christian shrine in the world. And justifiably so. Here, within the church, are the last five stations of the cross; the 10th  station where Jesus was stripped of his clothes, the 11th, where he was nailed to the cross, the 12th, where he died on  the cross, the 13th, where the body was removed from the cross, and the 14th, his tomb.

(4) For all this weighty tradition, the approach and entrance to the church is nondescript. You have to ask for  directions. Even to the devout Christian pilgrims walking along the Via Dolorosa—The Way of Sorrows—first nine  stations look clueless. Then a courtyard appears, hemmed in by other buildings and a doorway to one side. This leads  to a vast area of huge stone architecture.

(5) Immediately inside the entrance is your first stop. It’s the stone of anointing: this is the place, according to  Greek tradition, where Christ was removed from the cross. The Roman Catholics, however, believe it to be the spot  where Jesus’ body was prepared for burial by Joseph.

(6) What happened next? Jesus was buried. He was taken to a place outside the city of Jerusalem where other  graves existed and there, he was buried in a cave. However, all is long gone, destroyed by continued attacks and  rebuilding; what remains is the massive—and impressive—Rotunda (a round building with a dome) that Emperor  Constantine built. Under this, and right in the centre of the Rotunda, is the structure that contains the Holy Sepulchre.

(7) ‘How do you know that this is Jesus’ tomb ?’ I asked one of the pilgrims standing next to me. He was clueless,  more interested, like the rest of them, in the novelty of it and in photographing it, than in its history or tradition.

(8) At the start of the first century, the place was a disused quarry outside the city walls. According to the gospels,  Jesus’ crucifixion occurred ‘at a place outside the city walls with graves nearby ’. Archaeologists have discovered tombs  from that era, so the site is compatible with the biblical period.

(9) The structure at the site is a marble tomb built over the original burial chamber. It has two rooms, and you  enter four at a time into the first of these, the Chapel of the Angel. Here, the Angel is supposed to have sat on a stone to  recount Christ’s resurrection. A low door made of white marble, partly worn away by pilgrims’ hands, leads to a smaller  chamber inside. This is the ‘room of the tomb’, the place where Jesus was buried.

(10) We entered in a single file. On my right was a large marble slab that covered the original rock bench on which  the body of Jesus was laid. A woman knelt and prayed. Her eyes were wet with tears. She pressed her face against the  slab to hide them, but it only made it worse. 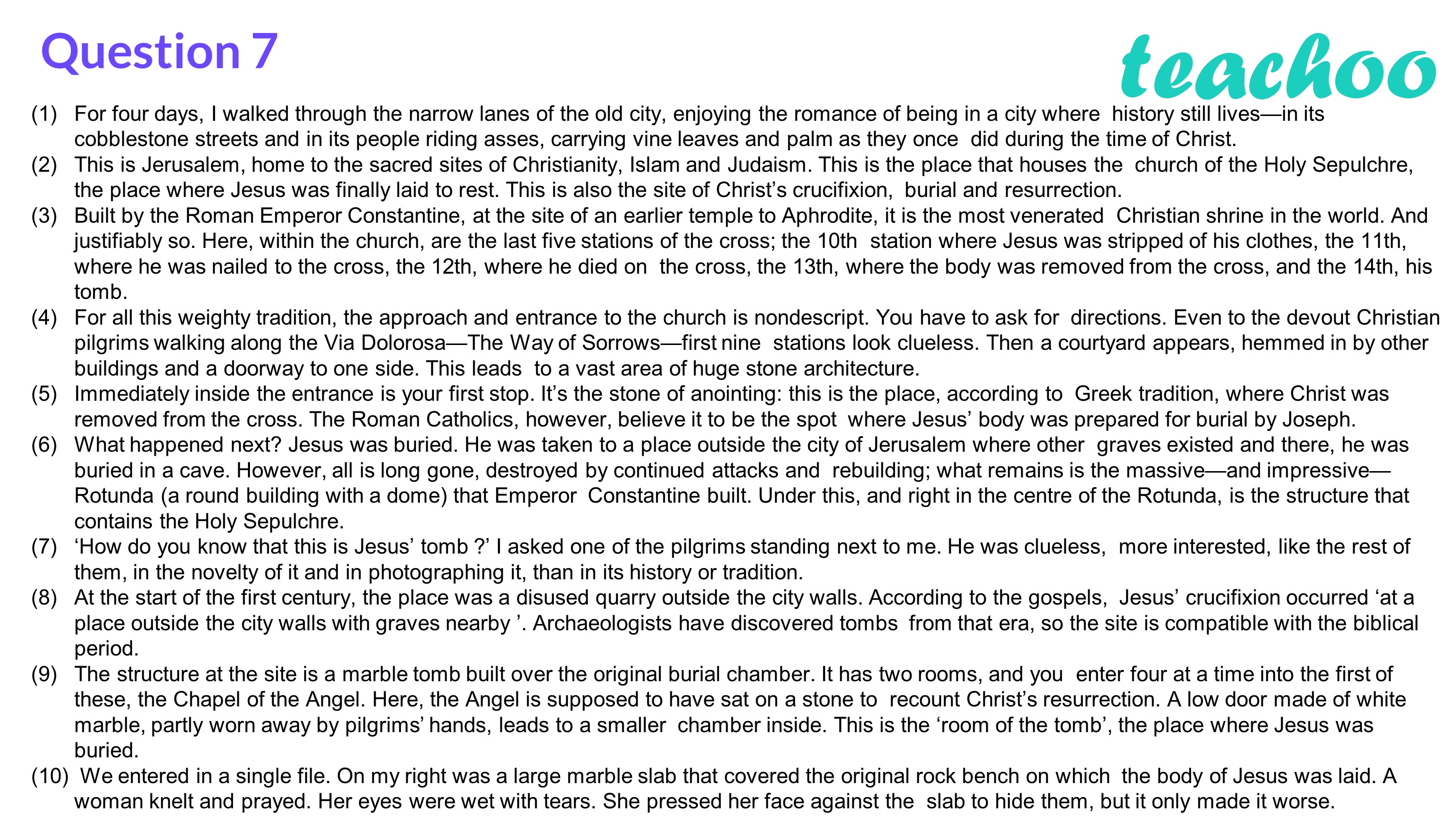 How does Jerusalem still retain the charm of  the ancient era?

(A) There are narrow lanes.

(B) Roads are paved with cobblestones.

(D) All of the above

So, the correct answer is (D). 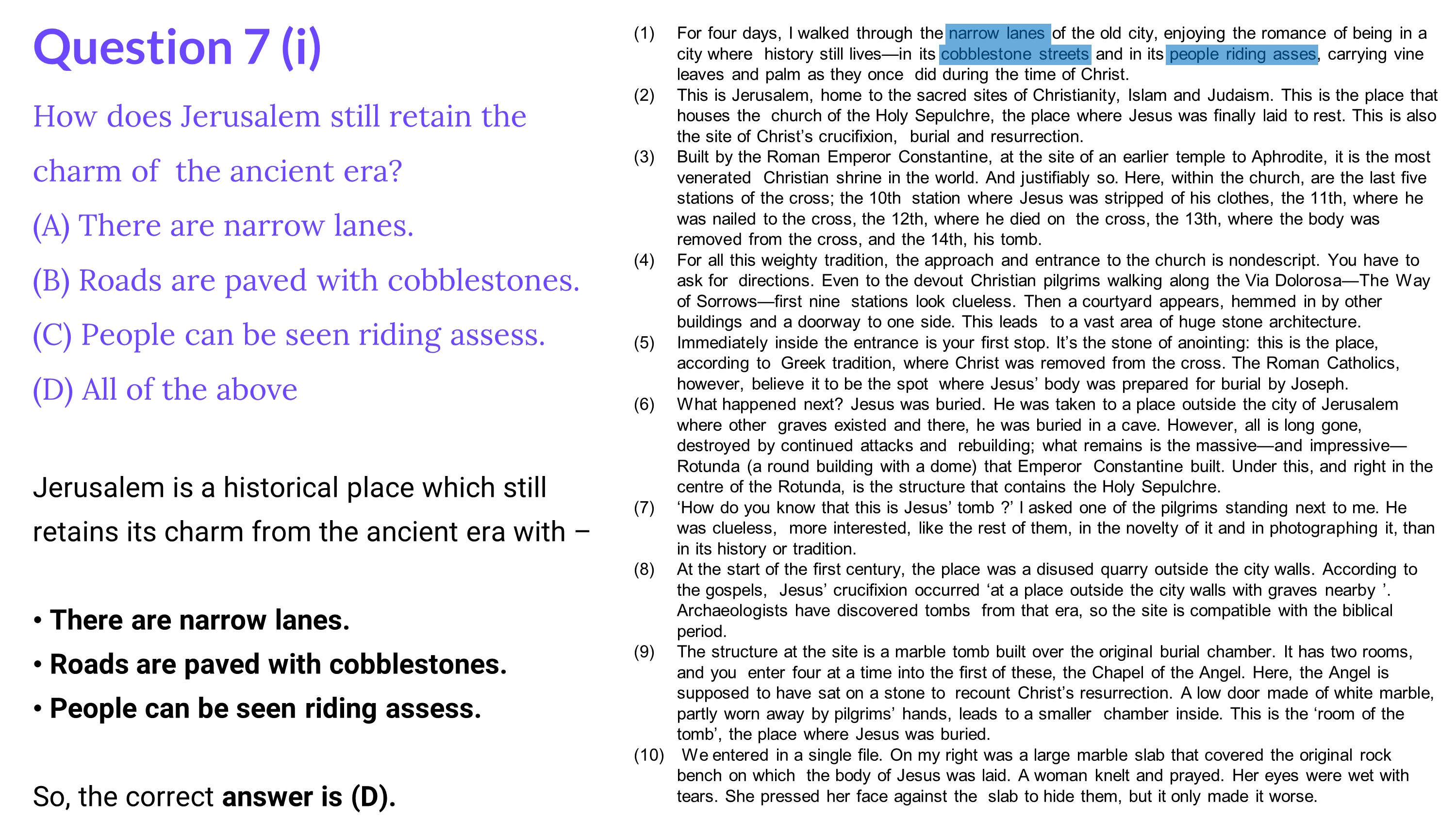 Holy Sepulchre is sacred to:

(D) All of the above

Jerusalem is a place which holds importance to all - Christianity, Islam and Judaism. 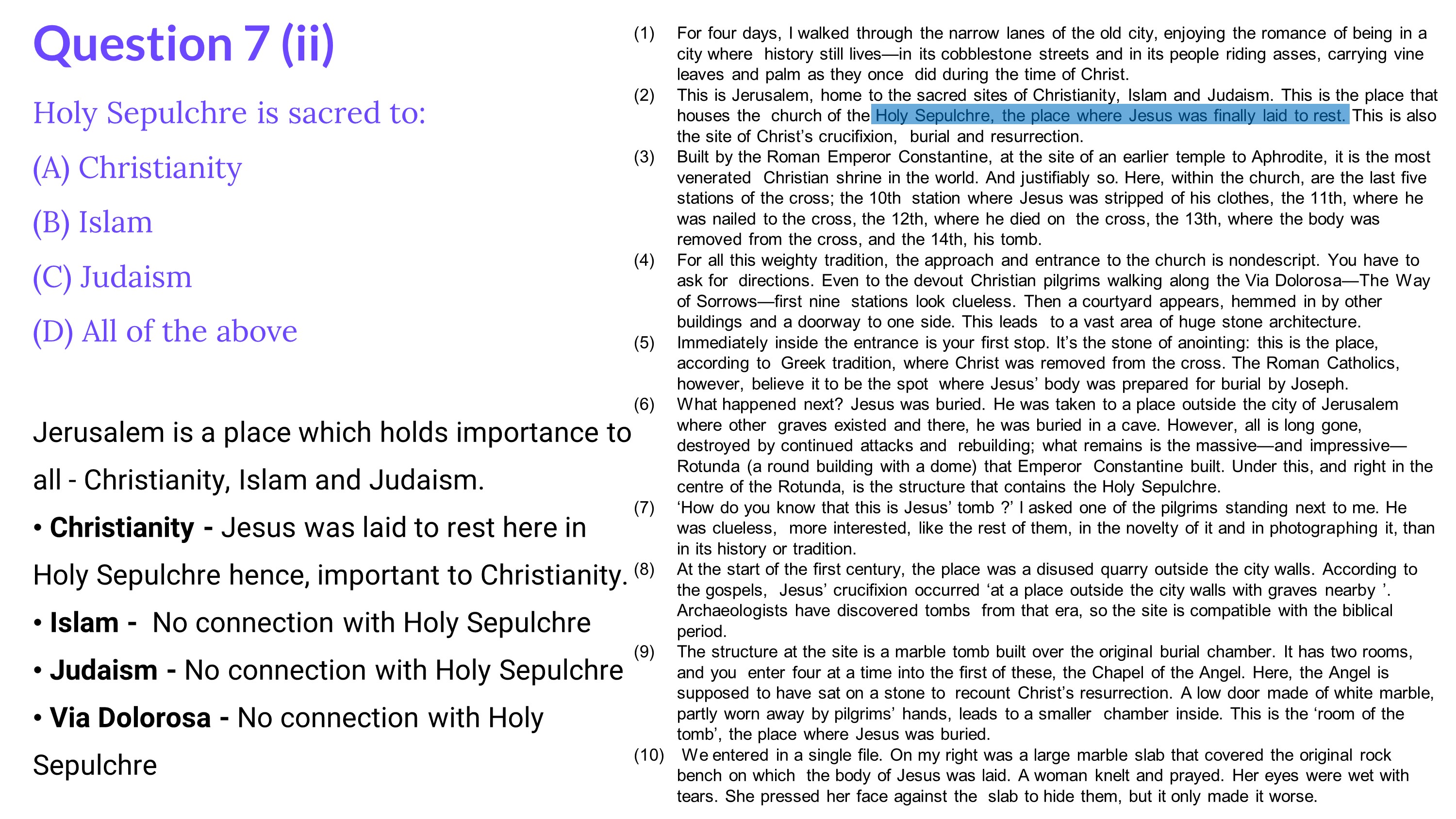 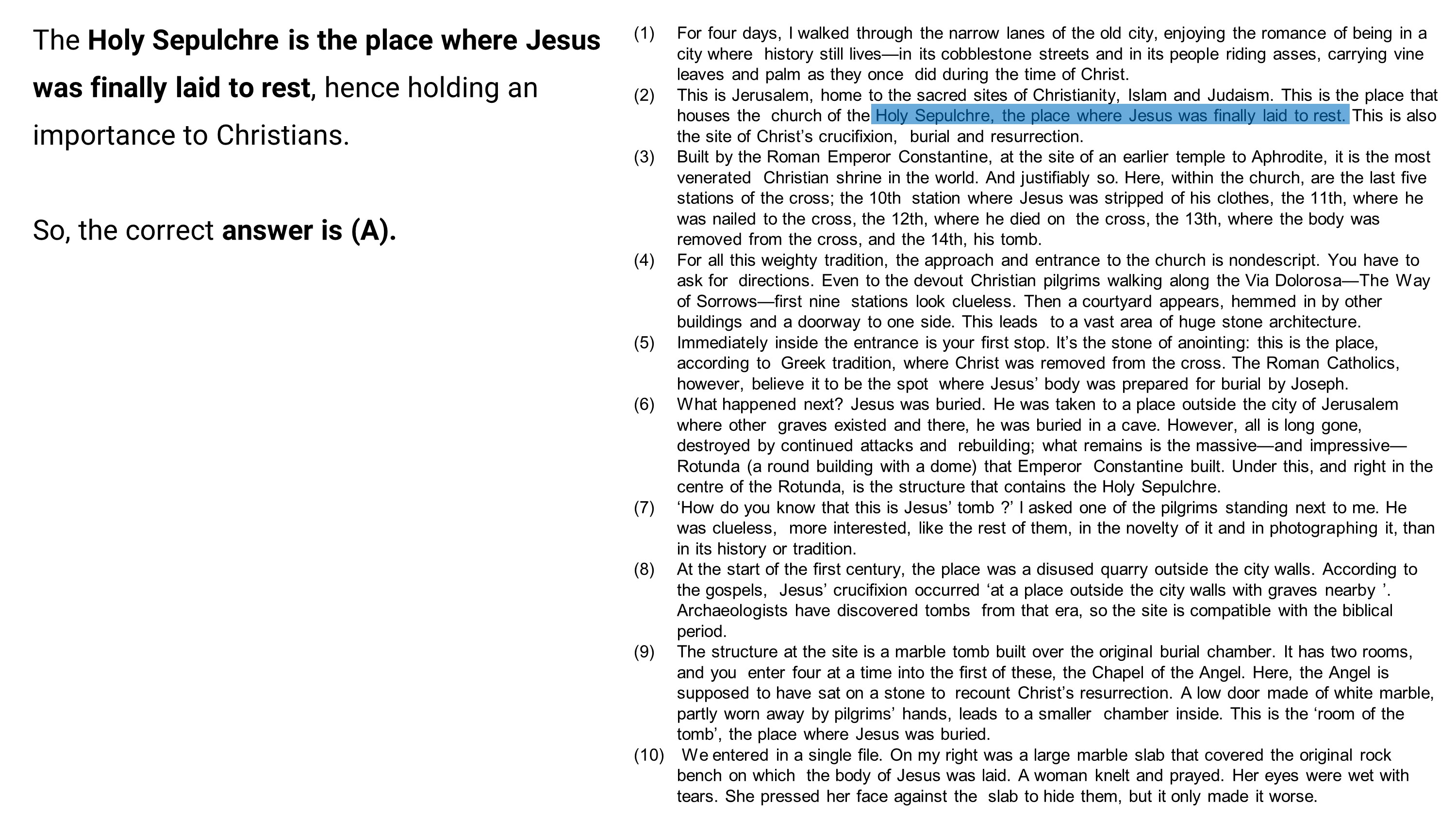 Why does one have to constantly ask for  directions to the church?

(A) Its lanes are narrow.

(B) Entrance to the church is nondescript.

(C) People are not tourist-friendly.

(D) Everyone is lost in enjoying the romance  of the place.

The approach and entrance to the church is nondescript , making everyone ask for directions. 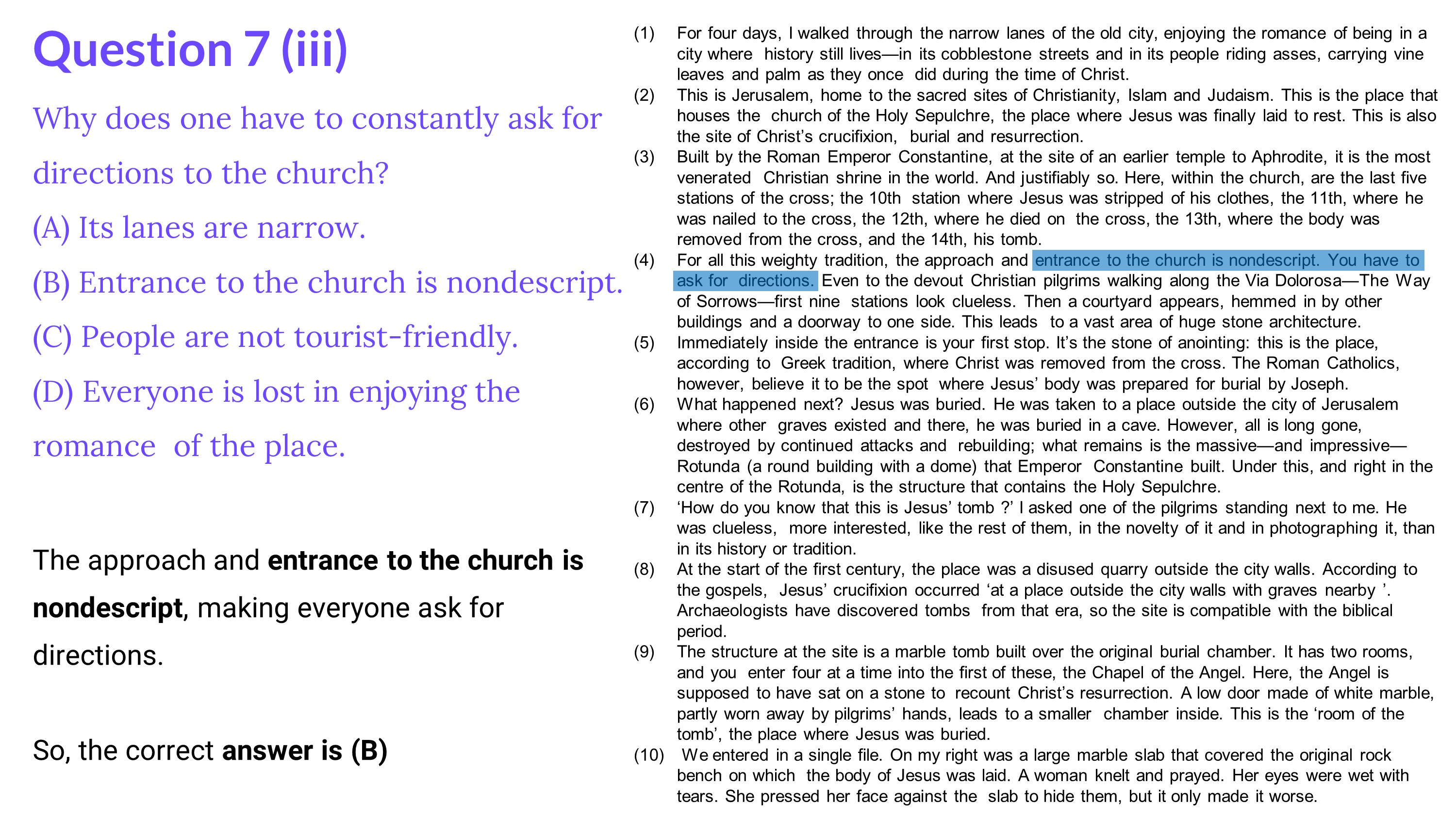 Where was Jesus buried?

(B) At a place outside the city.

(C) In the Holy Sepulchre.

So, the correct answer is (D). 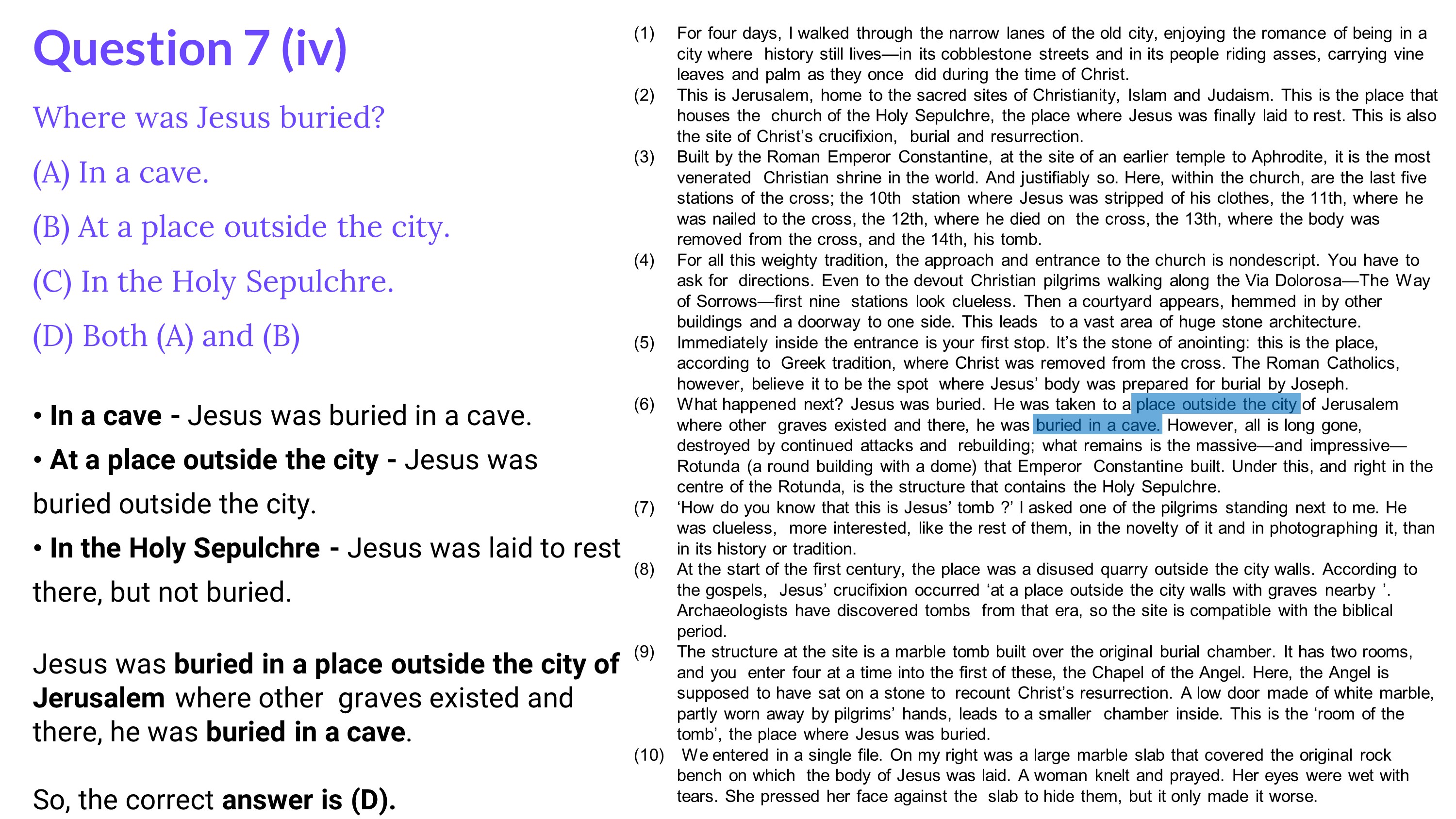 Where was the body of Jesus laid?

The body of Jesus was laid on a Rock Bench . 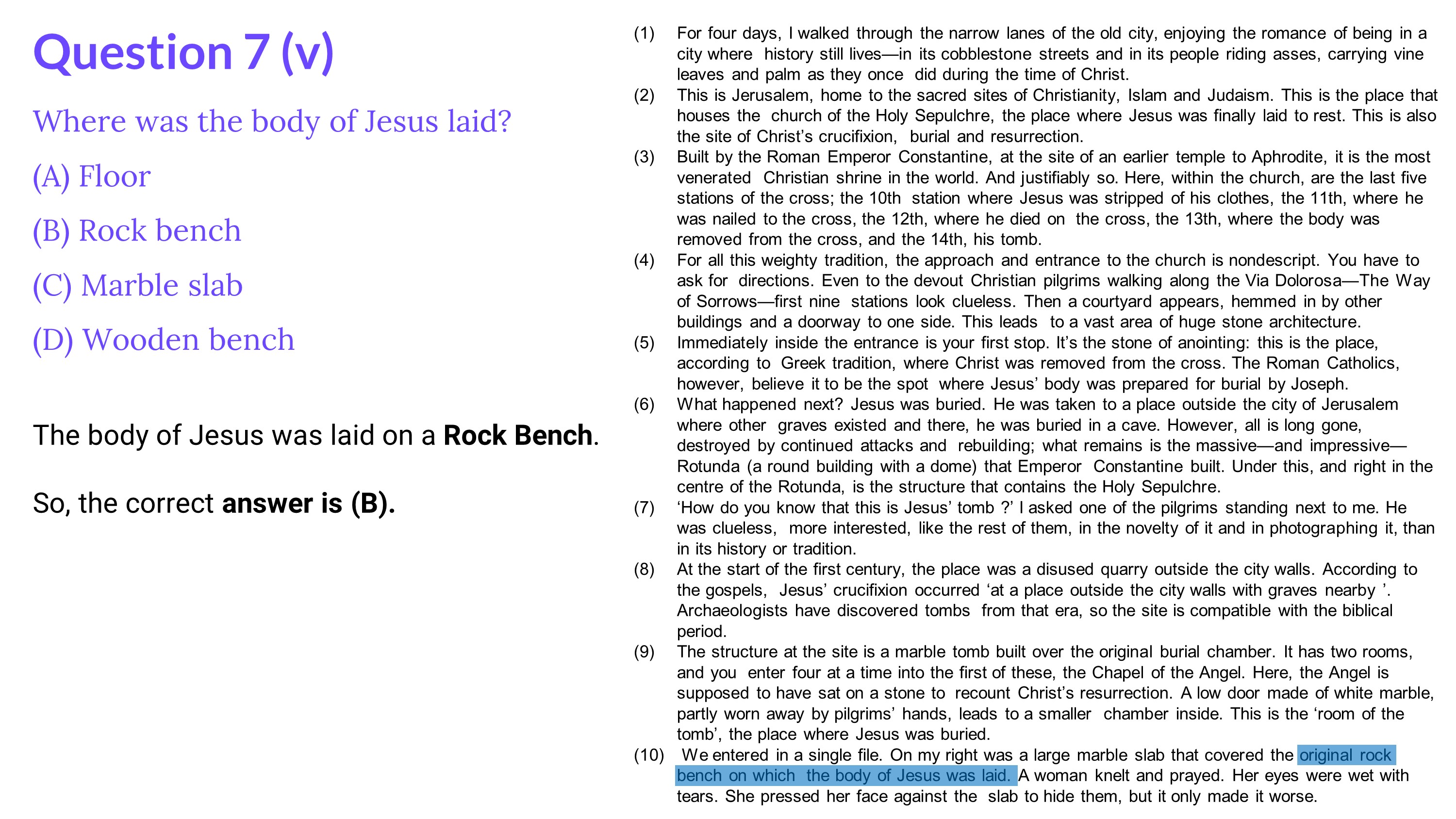 How many stations were there in the church?

The last 5 stations have been mentioned -

Therefore, the last station is 14th, his tomb . 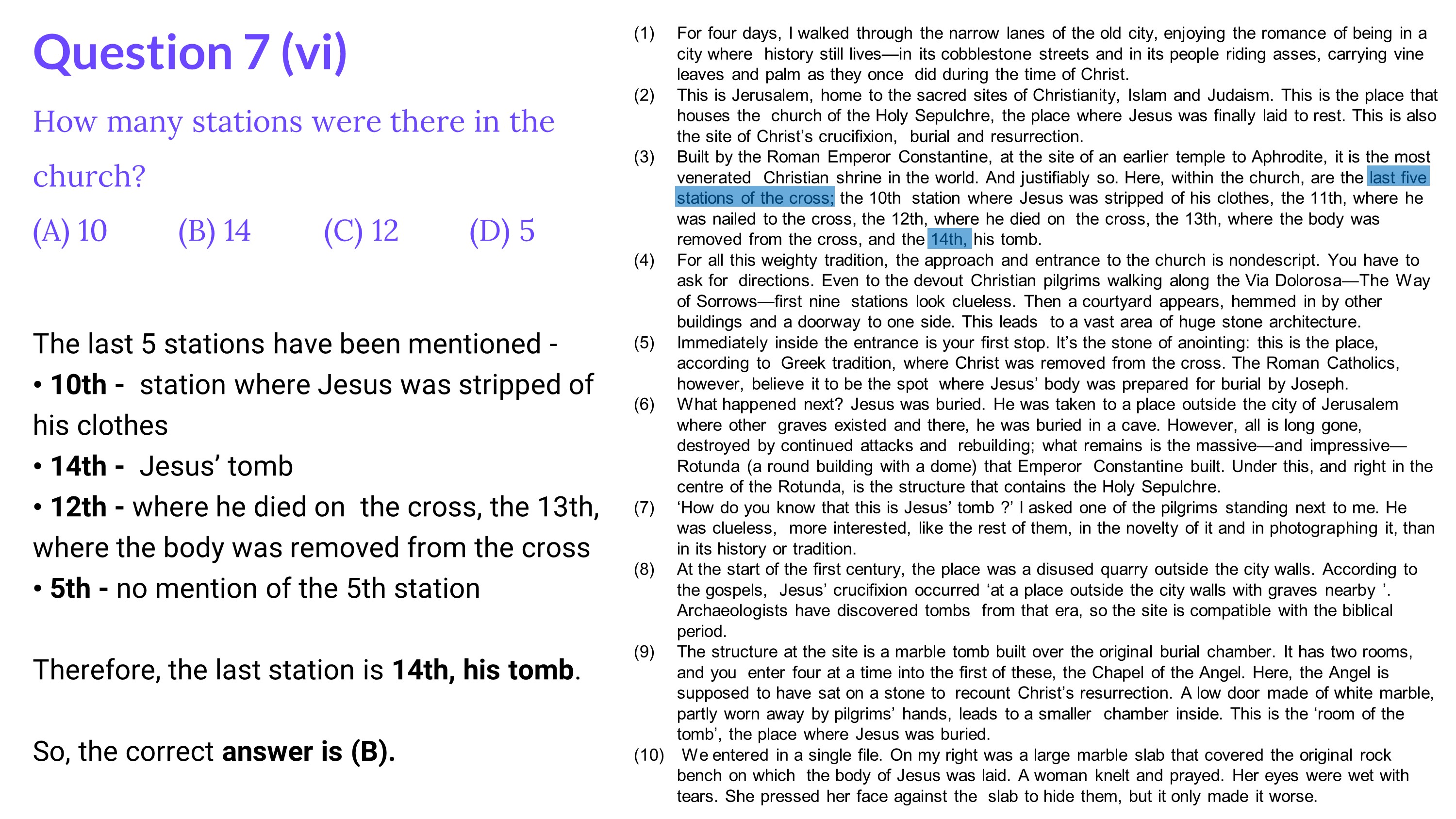 How many stations were there in the church?

Jerusalem is the city where Christ was crucified , buried, resurrected and finally laid to rest. 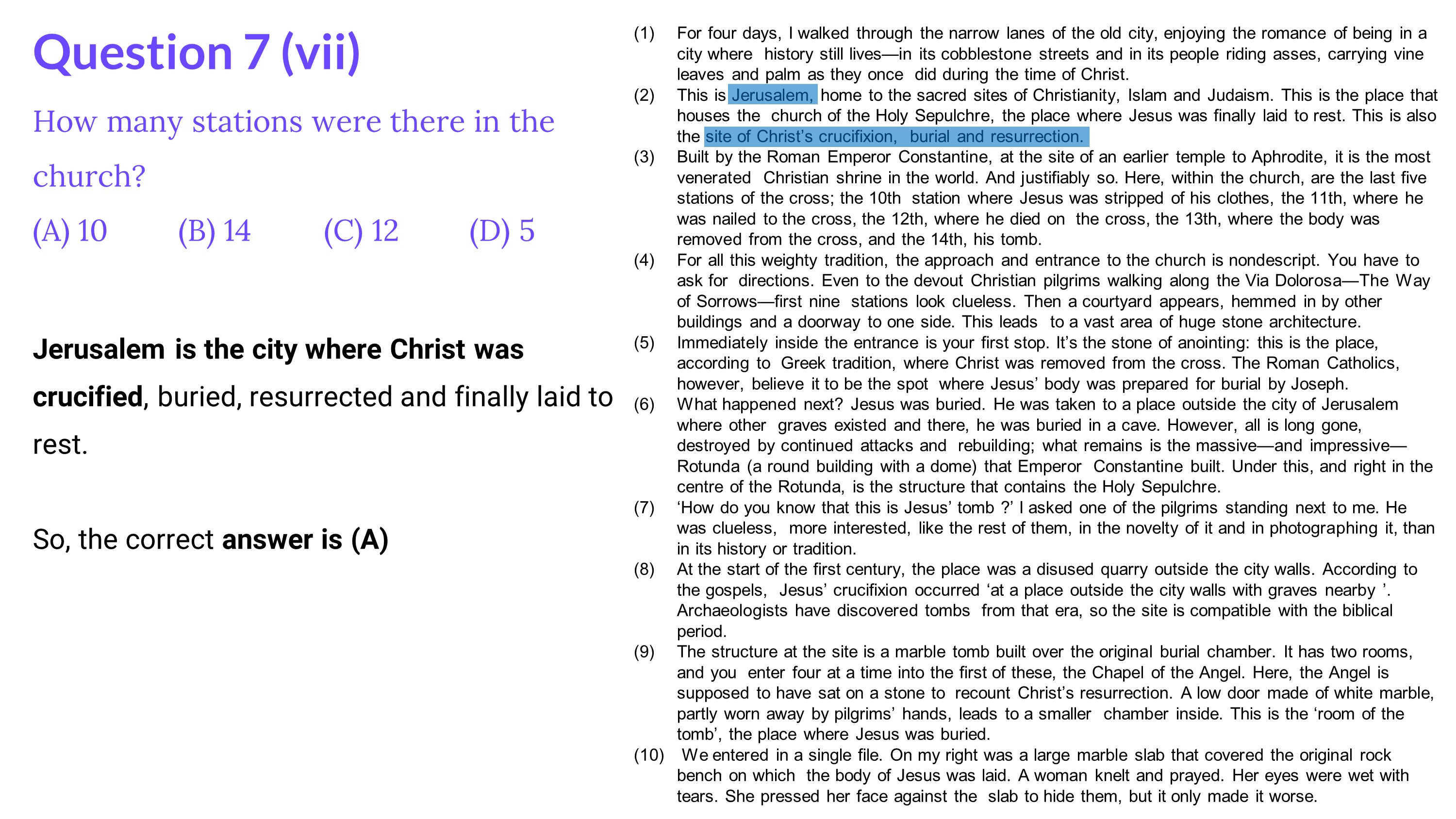 Jesus was nailed to the cross at the ___.

Christ was nailed to the cross at the 11th station of the church.

So, the correct answer is (A).

(A) The way of sorrows

(B) A vast area of huge stone architecture

The courtyard is hemmed by other buildings and the doorway to one side and the other side leads to a vast area of huge stone architecture . 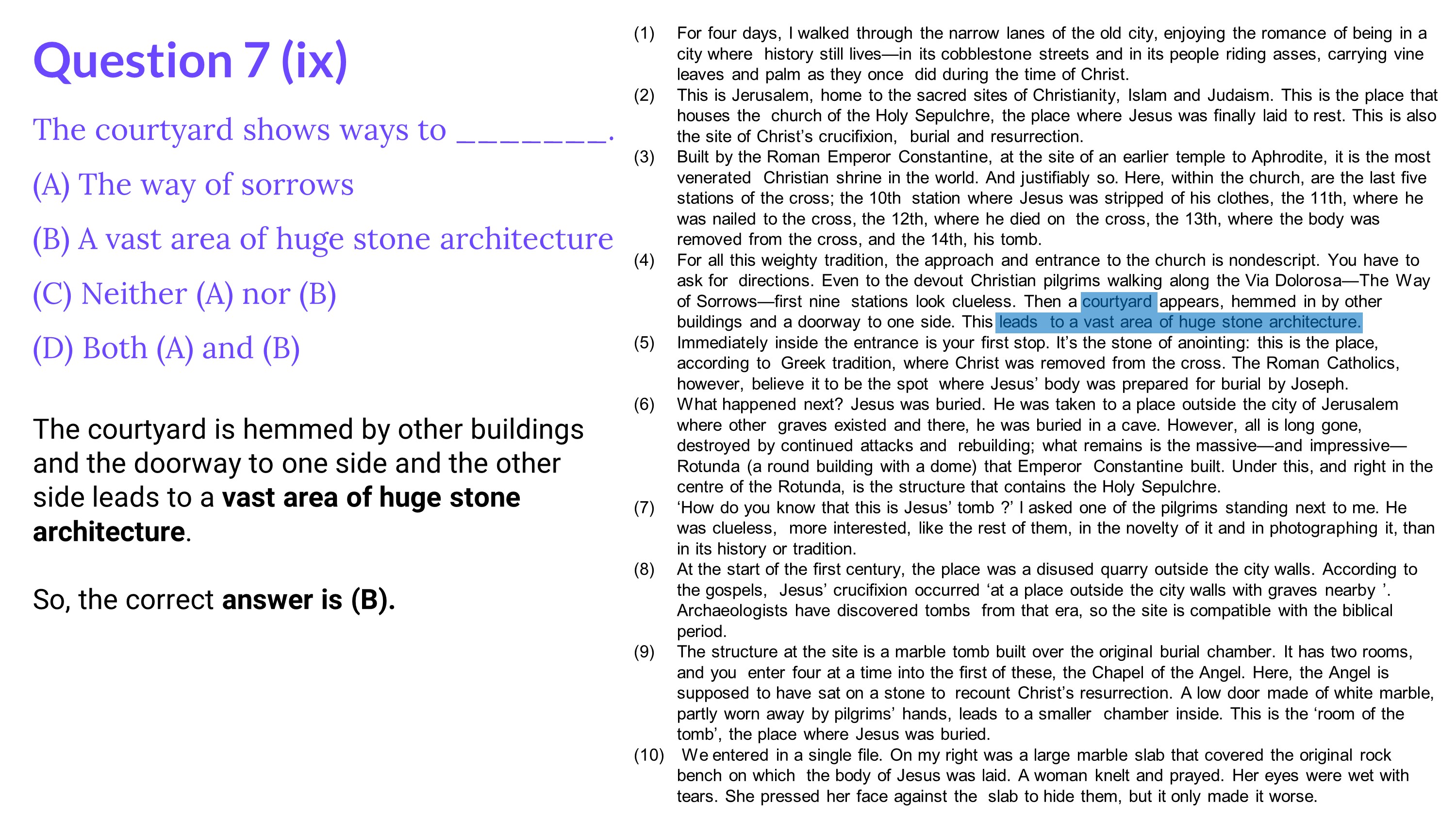 Rotunda was built by Emperor Constantine . 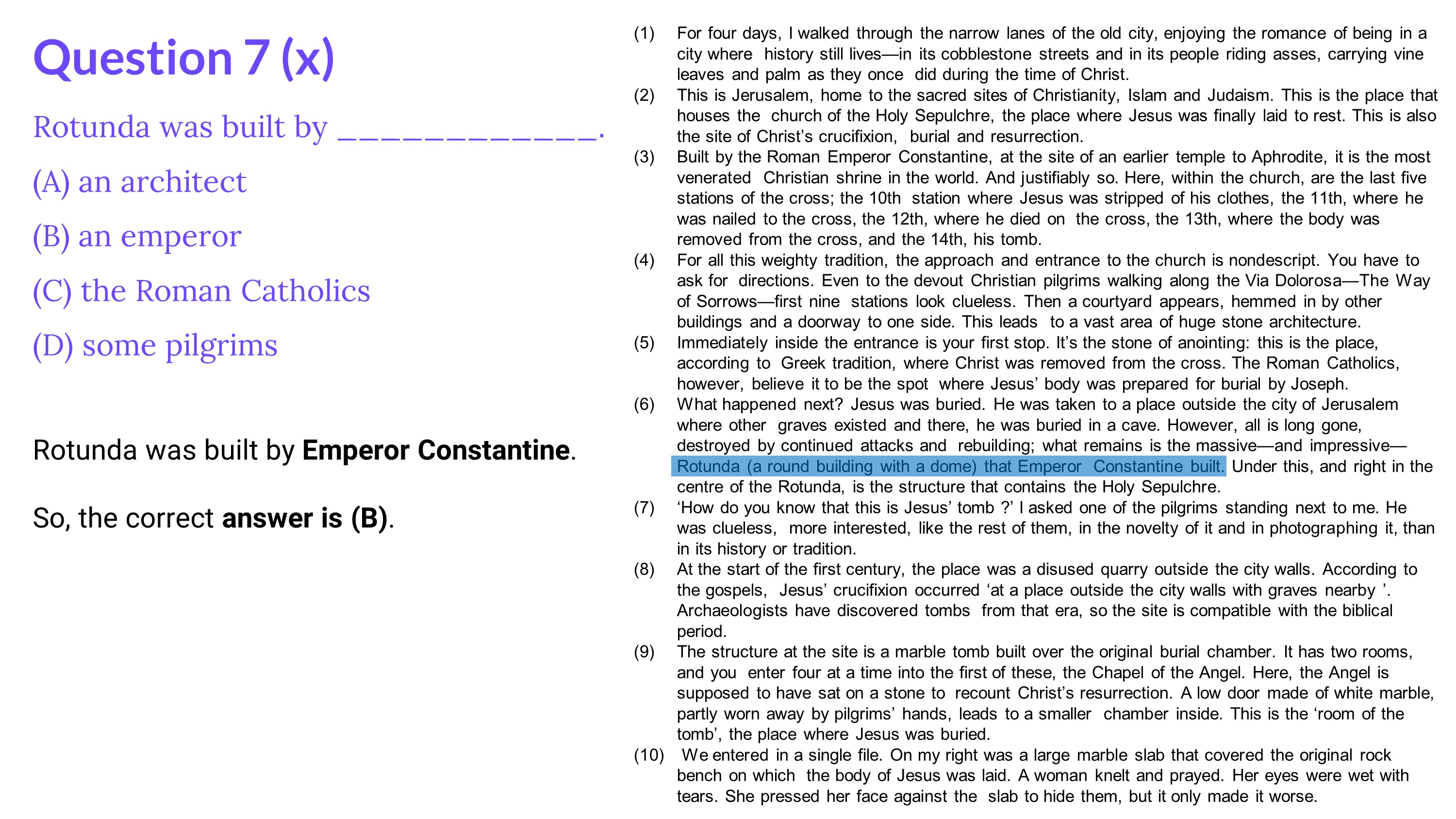